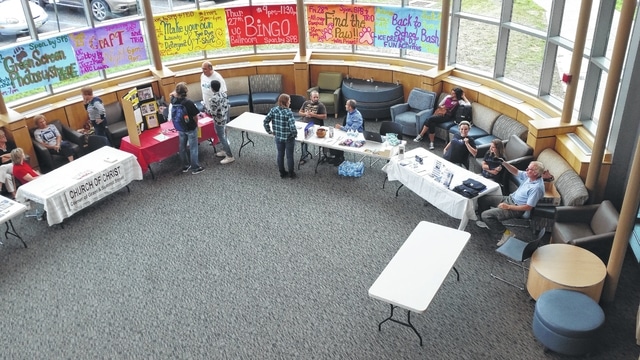 Starting college can be a rough time. Students are on their own, often for the first time. They are learning about budgeting, managing their lives, work, legal documentation, schooling, going through tests, moving, and so on. The whole ordeal can be overwhelming, but institutions like Shawnee State University (SSU) try to make the experience as easy and enjoyable for the student as possible, with special welcoming events and other parties. There is one aspect some people forget about, however: religion.

A student’s need to receive religious fulfillment or spiritual needs can be as important to some as anything else mentioned, which is why Shawnee extends a hand every year to incoming students, so they can learn what the community offers.

Shawnee State University’s Annual Ministry Fair was held last week, and with the assistance of 11 vendors, was considered a success.

Justin McMillan, coordinator of student life and multicultural affairs, organized the event this year and said it went over pretty well for all involved parties.

“We want students to have a sense of what is going on in the community and what is out there, so they can be involved,” McMillan said. “We feel like it went over very well. We had a lot of new students asking what churches we had in the area and I am glad we have events like this to let them know. I think students were able to walk away with some ideas of places to visit when they have the time.”

One of the churches at the event was Temple Baptist, with Pastor John Gowdy.

Gowdy said that his ministry has a lot of appeal to SSU students, especially with a focus group called Lifeline that is only for college students. He also has SSU professors involved, who show up to give occasional lectures.

“If my son or daughter were in school again, traveling to a new place, I would like to know there was something like Shawnee’s Ministry Fair to introduce them to the churches in their new neighborhood, so that they could find a church that sincerely cared and wanted to give them the kind of spiritual connection they need,” he said.

Through Lifeline, students are also taken on various trips, where they can bond and become closer to one another, with the love of Christ being the center of it all.

McMillan said that he takes the task seriously and hopes he was able to help some students.

“Churches give students the opportunity to feel the same way they did at home,” McMillan said. “This is why we have events like the Ministry Fair.”