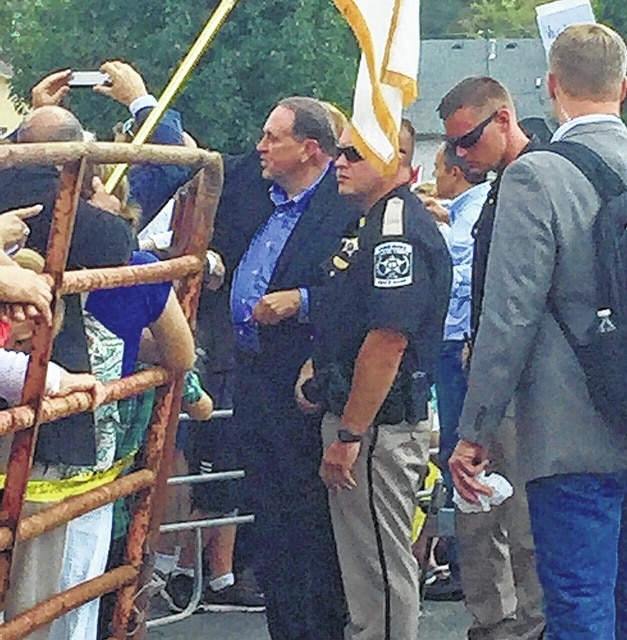 Huckabee told the crowd that they must stand up to what he defined as a tyrannical branch of government.

“It is not about one clerk, saying she will not issue marriage licenses, its that every one of us will have to decide whether or not we want to keep this great Republic, or whether we’re willing to sacrifice it and surrender it to tyranny,” Huckabee said. “And I think we’ve gathered here to say, we will not surrender to the tyranny of one branch of government.”

Huckabee attributed Davis’s release from the jail to the intervention of God, stating words from, Forrest Gump, that “God showed up.”

Huckabee expounded upon his reasoning for pointing out Davis’s political party affiliation.

“Now, I only bring that into it because I don’t want people to think that this is an issue about Democrats and Republicans,” he said. “Because it was a Republican Judge (Bunning) who put her in this jail to begin with. I don’t care what party a person is, as much as I care whether or not they believe that this country was founded on basic, fundamental principles that all of us must live under and for those who want the courts to make laws so the politicians can be excused and cowardly hide behind the court, and not take a stand, I say that is exactly what our country was not supposed to do.”

Standing upon the platform, and accompanied by Huckabee and her attorney Mathew D. Staver, Davis was very emotional, bursting into tears, taking a few minutes to compose herself, and briefly addressed the crowd.

“Thank you all so much, I love you all so very much,” Davis said. “I just want to give God the glory. His people have rallied and you are a strong people. We serve a living God who knows exactly where each and everyone of us is at. Just keep on pressing. Don’t let down. Because He is here. He is worthy, he’s worthy. I love you guys. Thank you so much.”

After Davis spoke, Staver solicited applause from the crowd for Davis’s husband, Joe Davis who he said has been, “A faithful supporter at her side.”

Staver also communicated that Davis would not be addressing the case directly, and would be returning to work this week to resume her position as Rowan County Clerk.