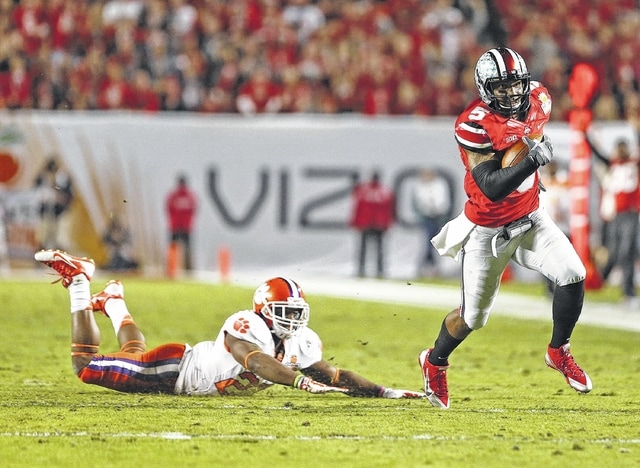 The smart bet has always seemed to be that Braxton Miller’s twice-surgically repaired shoulder would not be strong enough to allow him to make the throws necessary to be Ohio State’s starting quarterback this season.

Thursday night in a story on Sports Illustrated’s website, Miller said he will line up as an H-back, a combination of wide receiver and running back, in preseason practice and when the defending national champion Buckeyes open the season at Virginia Tech on Sept. 7.

He said he has been working up to four hours a day on the transition to wide receiver, watching film and catching passes from J.T. Barrett, the quarterback who replaced him the first 12 games of last season.

The immediate reaction was that this was going to be spectacular, with Miller bringing the same explosiveness in the open field as a receiver as he did at quarterback when he was the Big Ten’s Offensive Player of the Year in 2012 and 2013.

If Miller would be even half as dangerous as a receiver and punt returner as he was as a quarterback, he would cause big problems for opposing defenses.

And, by seemingly removing himself from the three-way quarterback competition with Cardale Jones and Barrett, Miller immediately made that situation much more manageable.

On the surface, it looks like not just a win-win situation but maybe another reason to think OSU can repeat as national champion.

The bottom line seems to be that Miller realized it was going to be a long time before he could make all the throws and the number of throws it would take to play quarterback.

OSU coach Urban Meyer was non-committal, saying he hadn’t even seen Miller play receiver and that no final decision had been made. But does anyone believe wide receivers coach Zach Smith and strength coach Mickey Marotti, who is Meyer’s right-hand man, would have been discussing Miller moving to receiver without Meyer’s approval?

Miller might be the most dangerous offensive player in college football when he runs the ball. He might be the Ohio State player who will finally live up to the comparisons to Percy Harvin, one of Meyer’s favorite weapons at Florida.

But running after taking a snap from the center in a shotgun formation and running it after catching a pass are two different things.

Miller still has to prove he can catch passes and run routes. Can he block? And, maybe most importantly, can he stay healthy, something that has been an issue at times for him at Ohio State and in high school?

The risk of re-injuring his shoulder might be less at wide receiver than at quarterback, but that risk is not zero.

Chances are good Miller will spend most of his time at wide receiver this season and Barrett and Jones will both play quarterback and everyone will be happy, except maybe the receivers who lost playing time to Miller.

What seems so logical now would have been unthinkable just two years ago. It’s easy to forget Miller quarterbacked Ohio State to 22 consecutive wins in 2012 and 2013 and finished in the top 10 in the voting for the Heisman Trophy twice.

Whether he was ever going to be an NFL quarterback is debatable. But before he got hurt, his first-step acceleration and ability to make cuts kept opposing defensive coordinators awake at night even if his passing might not have done the same.

Who would have believed then that Ohio State would be better because Miller decided not to play quarterback? But that appears to be what is happening.