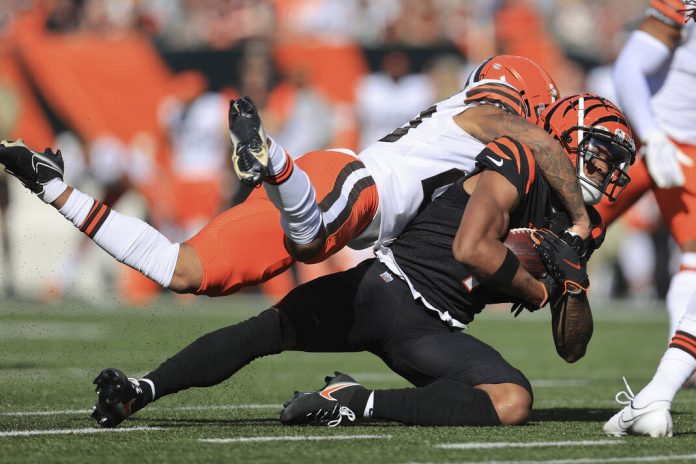 BEREA (AP) — Some of the Browns’ defensive backs were disappointed when Ja’Marr Chase missed the previous game against them because of a hip injury.

They’ll finally catch up with the Bengals’ uber-confident star wide receiver on Sunday.

It won’t be to exchange Christmas cards.

Chase added fuel to an already heated AFC North rivalry this summer when he called out Cleveland cornerbacks Denzel Ward and Greg Newsome II during an appearance on a podcast.

His comments — “they all just talk crazy” among others — got back to the Browns, whixh were anxious to face him on Halloween.

Chase didn’t play in Cleveland’s shocking 32-13 blowout of Cincinnati, but that doesn’t mean the Browns have forgotten what he said.

“It’s kind of floating around the building, guys joking around saying it,” safety John Johnson III said Wednesday. “But at the end of the day, we just gotta go out there and compete.”

Chase is healthy after missing four games with a hip injury that took some time to properly diagnose.

He was initially hurt in Week 6 against New Orleans and played the following game, catching eight passes for 130 yards and two touchdowns in a win over Atlanta, before the pain became intolerable.

He spent a month resting, and the Bengals went 3-1 without him.

The AP Offensive Rookie of the Year in 2021, Chase returned last week and had an immediate impact, catching seven passes for 97 yards in the Bengals’ 27-24 win over Kansas City in a rematch of last season’s conference title game.

Chase’s connection with Joe Burrow is as strong as any WR-QB duo in the league, and the Browns (5-7) know they’ve got their hands full with a receiver who is capable of scoring from any spot on the field.

“He’s dynamic,” Browns coach Kevin Stefanski said. “Any time he touches it, he can go. He can catch a slant. He can catch a go ball or they can throw him a wide receiver screen. He can do it all, and he is very, very explosive.”

The Browns, which have won five straight over the Bengals (8-4), frustrated Chase into having a dreadful game last season in Cincinnati.

Early in the game, Ward stepped in front of a pass intended for Chase and returned it 99 yards for a score, setting the tone for Cleveland’s lopsided win.

Chase can be emotionally combustive and the Browns know it.

He was called for a taunting penalty last week against the Chiefs after gesturing toward Kansas City defensive back Justin Reid following a touchdown.

In the days leading into the game, Reid had said he couldn’t remember the names of Cincinnati’s receivers and that didn’t sit well with Chase, who celebrated a TD by teammate Tee Higgins by pretending to peel off dollar bills in Reid’s face.

With the Browns facing a win-or-forget-the-playoffs scenario Sunday, Johnson and Ward didn’t say anything inflammatory about Chase.

While they may not agree with everything he says, there’s a level of respect for a player with elite skills.

But with the Bengals, it’s more than Chase — as Burrow also spreads the ball to his backs along with Higgins and Tyler Boyd.

While Johnson said the Bengals have “talkative guys,” they also have talented ones.