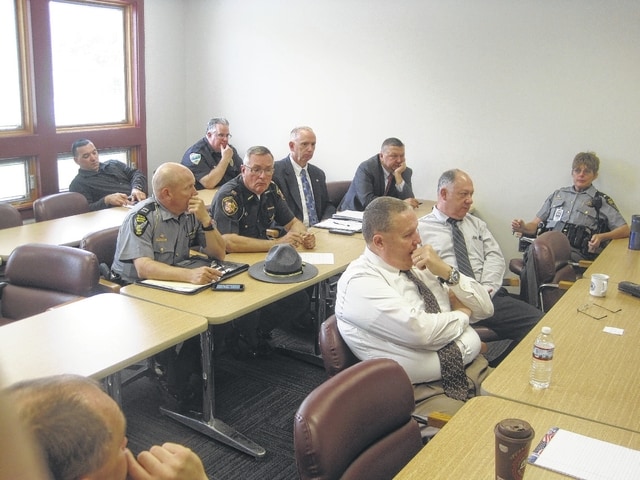 When all area law enforcement agencies met in an undisclosed location recently it was to plan a joint operation, from June 10 to June 13, which resulted in some major arrests.

During that blitz, Robert L. Turner, 34, of Portsmouth, who reportedly revealed he had 157 grams of heroin on his person, was taken into custody.

Turner was stopped by Troopers on U.S. 23 for a traffic violation. Troopers said they observed indicators of drug activity and a narcotics canine alerted to the vehicle. A search produced cocaine residue in the vehicle. A search of Turner reportedly revealed he had approximately 157 grams of heroin concealed on his person. Troopers said they had information that there was more contraband at the residence and the Scioto County Drug Task Force was contacted. The Portsmouth Police Department and members of the Scioto County Drug Task Force went to the residence and seized 45 grams of cocaine, 11 grams of heroin, 4 grams of marijuana, digital scales and a .40 caliber handgun. Suspect Turner was incarcerated and charged with drug possession and drug trafficking, felonies of the first degree.

Local law enforcement agencies joined forces in a collaborate effort to address the drug problem in Scioto County. In their operational meetings prior to the blitz they share intelligence and resources. The drug blitz began June 10 at 10 a.m. and continued thru June 13 at 3 a.m.. The agencies that participated in the blitz were the New Boston Police Department, Portsmouth Police Department, Scioto County Drug Task Force, Scioto County Prosecutor’s Office, Ohio Investigative Unit and the Ohio State Highway Patrol.

The blitz yielded eight felony arrests and five arrests for OVI. Some of the felony arrests resulted in immediate apprehensions and other will be presented to the Scioto County grand jury for indictments.

“We would, of course, liked to have had a little better results, but those are good results,” Lieutenant Mike Gore, commander of the Portsmouth Post of the Ohio State Highway Patrol, said. “It always works good together. We work well with our law enforcement agency partners. Everybody’s got the same mission – trying to make the community better to live in and the best way to do that is to remove the scourge of illegal drug use.”

Dispatchers received a call from a motorist reporting a tractor trailer as possibly impaired, driving on U.S. 52 entering New Boston. Officers from the New Boston Police Department made the traffic stop and were assisted by state troopers. The driver of the semi was identified as Robert A. Couch, age 35 from Saint Conover, North Carolina. He was found to be under the influence of drugs and was subsequently arrested for operating a vehicle under the influence (OVI). There was also a warrant for his arrest for a prior OVI charge he had failed to appear on. Troopers said a search of the semi revealed there were schedule II and schedule IV pills in possession of the driver. The suspect was additionally charged with felony-5 possession of pills.

The Portsmouth Post received a call of an impaired driver and units were dispatched to the area. Troopers located the vehicle and initiated a traffic stop. The driver was removed from the vehicle and subsequently arrested for OVI. She was found to be in possession of pills and was also charged with OVI.

Troopers stopped a vehicle for a traffic violation. The suspects were travelling from Dayton to Portsmouth. They said drug indicators were present and the canine subsequently alerted to the vehicle. A search of the vehicle reportedly produced 12 grams of crack cocaine and five grams of heroin.

Troopers stopped a rental vehicle for a traffic violation. The suspects were travelling from Detroit to Portsmouth. Drug indicators were again reportedly present. The driver was requested to step out of his vehicle and consented to a pat-down. The Trooper felt what he believed to be contraband in the suspect’s pants pocket and the suspect surrendered 5 grams of cocaine.

An investigator with the Ohio State Highway Patrol was watching a drug house when a vehicle was observed parked and still occupied. The vehicle was later stopped and the female driver surrendered a syringe, two oxycontin pills and half a gram of white powder that was identified as methamphetamine.

The Portsmouth Post received a call of a pedestrian being struck in Lucasville and the hit-skip driver was reported to have turned off U.S. 23 onto a side street. The vehicle reportedly turned off its headlights as it fled. A Trooper was unable to find the pedestrian, but located a vehicle matching the description that had front end damage. The driver of the vehicle was subsequently arrested for OVI and a search revealed pills. The suspect was charged with felony-5 possession.

“Details like this one are an example of the continuing efforts of The Ohio State Highway Patrol and its law enforcement partners to make Scioto County, and the state of Ohio, a safer place for all its citizens,” Gore said. “We will continue to work joint enforcement efforts in the future.”