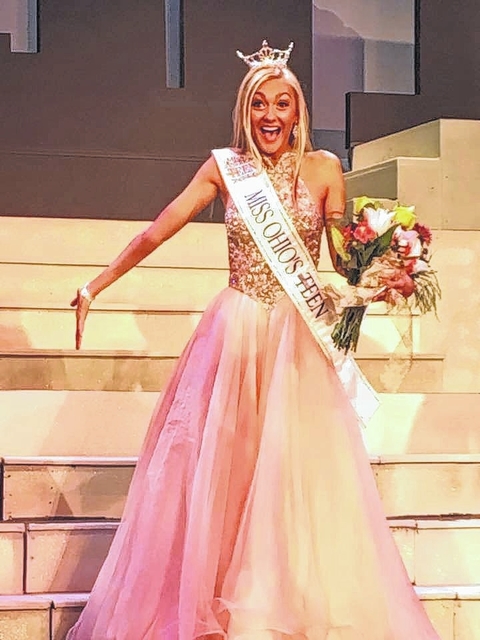 The Miss Ohio Scholarship program was recently held in Mansfield, Ohio, and at the end of the program — two title holders crowned in Portsmouth — walked away with the top titles.

After not holding the pageant for several years in Portsmouth, the previous organizers let go of the franchise and according to Lowe, preliminary pageants have been held in Portsmouth for a number of years.

Lowe and a number of other people petitioned the Miss Ohio Board to reestablish the program in Portsmouth and added the title Miss Shawnee. The local preliminary pageant has been held the last four years.

“Our program is called an open preliminary, where girls from all over the state of Ohio can take part. Alice and Madison earned their preliminary title by competing with us in February,” Lowe said.

When asked what was it like when they called her name as Miss Ohio Magoto said, “It was amazing, I don’t have words to express what I felt in that moment. I was very shocked from photos I’ve seen of me standing there covering my mouth, it was a surreal moment.”

Magoto of Cincinnati just graduated high school and has delayed planed to attend college in California, while she’s Miss Ohio.

When asked what her experience has been like since being crowned Miss Ohio Outstanding Teen, Heichel said, “It’s been absolutely amazing, this has been something I’ve been working towards for 10 years. To be able to achieve this will my mom by my side was great.”

Magoto and Heichel said they are looking forward to meeting all of the other contestants at the national pageant and are excited to compete.

Lowe said having the two title holders, reassures the work done locally to hold a successful, preliminary pageant. She said it takes a group of dedicated volunteers to make the local pageant a success.

“We all have jobs and do lots of other things in the community and it’s trying sometimes to pull of that together, when something like this happens it’s a huge reward and lets you know the commitment you have to empowering young women is really worth it,” Lowe said.