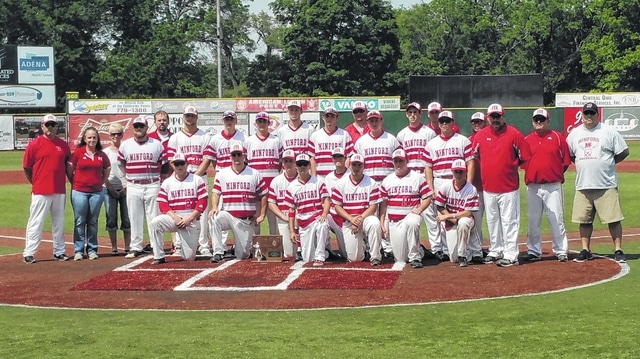 It was a memorable baseball season for the Mighty Minford Falcons. The Falcons enjoyed tremendous success on the diamond during the 2016 season. From the first pitch of the season until their final out in the OHSAA Division III Region 11 Finals, the Falcons knew they had to give 100 percent effort in each game to reach their team goals.

Despite falling shy of their ultimate goal, a state championship, Minford baseball coach Brent Daniels was proud of his team’s performance throughout the season as well as being impressed with their postseason run.

“We felt we could make a decent run in the tournament,” Daniels said.

Minford made more than a decent run, by any definition of the word. The Falcons were the last remaining Scioto County baseball team before they were eliminated in the regional finals round, meaning they were one of the top eight teams in Division III.

Although they finished as the regional runner-ups, they faced a tough season.

“We knew the conference was going to be tough,” Daniels said. “We dropped two tights ones early to Waverly and then had another two tight losses to Wheelersburg.”

Not relying on a single player to come up with a big moment also helped the Falcons reach the success they earned in 2016.

“It just wasn’t one kid throughout the year,” Daniels said. “It was a different kid it seemed like every night. Somebody was doing something to help us win a game. It just turned out to be a good year for us.”

Having multiple players make clutch plays was a huge asset for the Falcons, especially in the tournament rounds, according to Daniels.

“In the tournament, it was huge,” Daniels said. “Two of our bigger hitters were our three and four hitters, Eli (Daniels) and Jared (Alley) and a lot of people were getting around them, but then our seven, eight and nine hitters kept coming up with big plays. Our one and two hole guys, Ian (Tolle) and all those guys, each kid just stepped in.”

Daniels added it seemed when one part of the lineup was struggling, another part stepped up and made a play when the team needed it most.

“Everybody was doing something, getting a hit, putting a bunt down, or stealing a base at the right time,” Daniels said. “We made big plays when we really needed it.”

Resiliency was a key to Minford’s success as well. While they played great defensively, like all teams, they also had fielding errors. However, instead of focusing on the error, Daniels said his team used it as a learning experience and then focused on how to prevent that from happening again.

“You’re more apt to fail in baseball than you are to succeed,” Daniels said. “I explained to them we’re going to make mistakes throughout the game. Everyone makes mistakes. We just told them to let it go and make the next play. This group did an outstanding job with that.”

The team mentality Minford had in the season helped make this year one of the most enjoyable Daniels has had a a coach.

“They kept the mood light,” Daniels said. “It was serious, but we were joking with each other while practicing and even during a game we kept the mood light. This was not a real ‘rah-rah’ group, a real vocal group, they just knew when they went on the field it was time for business, but they knew how to keep the mood light, keep everybody in the game and how to keep it moving right along.”

Daniels said he would miss how great the team got along the most.

“They got along great,” Daniels said. “We had few arguments and when they did happen they were gone in like 10 minutes. They were just fun to be around. They kept it fun and interesting and played together as a team.”

Daniels said he was never asked about individual stats during the season.

“They didn’t care,” Daniels said. “As long as they won, that’s all that mattered. It didn’t matter who did what, as long as the team won they were happy.”