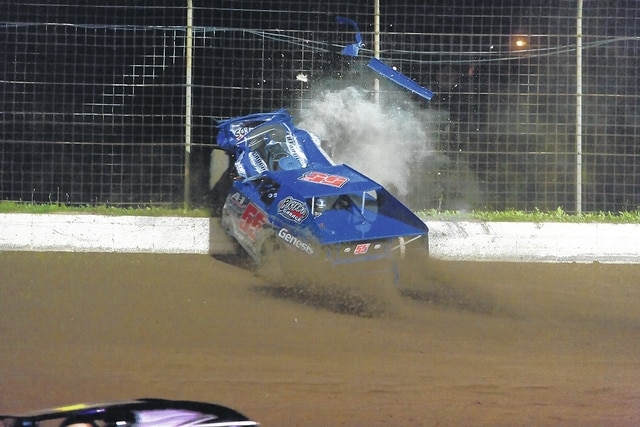 Portsmouth Raceway park kicked off it’s 2016 racing season over the weekend, holding two nights worth of racing, which was headlined by the Fifth Annual Boone Coleman Memorial “Gator 50”.

Jackie Boggs of Grayson, Kentucky won the late model race held in memoriam of Boone Coleman. Boggs has won the race four of the five times it has taken place. The two-time track champion took home a $5,000 purse after capturing the checkered flag Sunday.

Boggs also earned a provisional starting spot for the Dirt Track World Championship, which will be held at PRP in October, later this year.

Devin Gilpin of Colunbus, Indiana earned pole position for the “Gator 50”. He led one lap, until Boggs drove by to take the lead.

For the next 11 laps, Boggs remained in control of the race until Gilpin was able to retake the lead, thanks to several adjustments, including readjusting his line and heading to the top.

Boggs retook the lead with 24 laps remaining in the race and never looked back. As the race ticked away, Boggs increased his lead over the other drivers, as he pulled away from the pack.

Rod Conley finished second in the race, advancing all the way from 10th place when the initial green flag was waved. Conley finished the night one place shy of repeating as the winner of the annual event, as he won last year’s race.

Shannon Thornsberry, R.J. Conley and Jason Montgomery were the next three finishers, closing out the top five.

James Williamson and Terry Hicks had impressive showings in Sunday’s race. Williamson advanced 10 spots from green to checkered, finally finishing in the top ten at eighth. Hicks finished one spot below at ninth, advancing 11 spots from where he began the race.

The Modifieds were in action as well Sunday, where Ervin Vance of Beaver, KY took the Modified A-Main win.

Vance dominated Sunday’s modified feature, a day after discovering and later fixing serious engine problems with his car. The 29-year-old set quick time for both Saturday and Sunday’s races.

Josh Stumbo and Luke Jordan were named the Hard Charger award winners on Saturday and Sunday.

A Limited Late Model A-Main was forced to be rescheduled to Saturday, June 4, 2016 due to inclement weather. The race will take place prior to Saturday’s scheduled race card.

PRP will have a full card Saturday, including Late Models, Modifieds, Limited Lates, Bombers and Sport Mods. Gates open a 4:00 p.m. Additional information can be obtained by visiting www.portsraceway.com