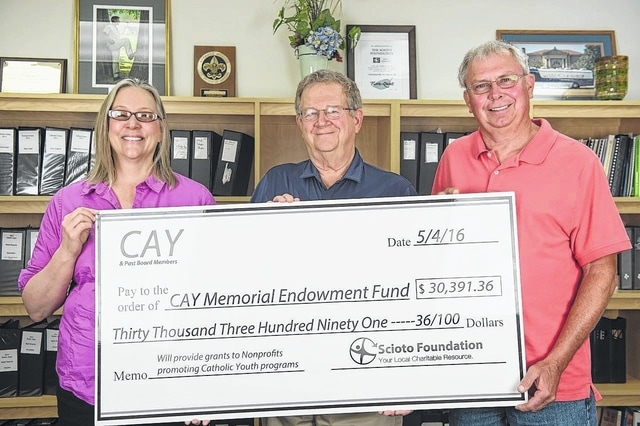 The Scioto Foundation has announced the establishment of the new CAY Memorial Endowment Fund, created to memorialize the 92 board members who founded the CAY organization in the 1960s and worked hard to see that there was a place for wholesome activities for youth in Scioto County.

Distributions from the CAY Memorial Endowment, which was set up with an initial contribution from William and Barbara Burke, will be accessed through grants to provide programs for Catholic youth in Scioto County. Additional donations from living CAY Board members, along with residual funds which remained in the CAY treasury after the organization ceased to exist, having built up the endowment fund.

For many years, the CAY building on Sunrise Avenue in Portsmouth was a popular place for teenagers to meet for activities.

“In the 70s, the Wednesday night dances were packed with kids,” recalls Joe Canter, who has helped with the endowment campaign.

Cantor is a former CAY board member who served as treasurer and president, and filled other roles through the years. He also helped build the Founders Room at the CAY.

“Everyone remembers the CAY from dances, receptions, Christmas parties, weddings and other events,” said Canter. “It was booked solid from Thanksgiving until Christmas. It was a big operation, but had no paid employees except for occasional maintenance jobs. When someone asks me ‘Why did you do dances, Joe?’ I say ‘When I was in high school, someone did it for me.’”

Around two years ago, the CAY Building’s name was changed to the Notre Dame Community Center, according to Will Burke.

“About the time the name was changed, I realized that over time the memory of the CAY will be forgotten,” said Burke. “In an effort to honor the board members and volunteers, I had the idea to suggest creating an endowment fund.”

Burke met with surviving board members three years ago and began discussion about setting up an endowment. He pursued it again with the group last summer and made an initial gift to open the fund at the Scioto Foundation. He also encouraged others to make donations.

Now annual distributions from the CAY Endowment will be used to help underwrite a variety of activities for Catholic young people ages 12 – 18 in Scioto County.

“Our purpose is twofold: communicating with the kids and encouraging them to have a relationship with God and with each other, and developing educational materials for a curriculum for the program,” said Paul Baum, director of one of the youth groups in Scioto County. “We also plan social things for the youth to do together in the community and we are working to create media to make presentations for them that are not only spiritual, but also professional, inviting and engaging.”

“We are creating spaces where the young people are gathering. We prioritize small group and mentoring sessions,” Baum added. “The junior high students meet at the Holy Redeemer Activities Center and the senior high school group meets at the new St. Mary’s Center.

“The endowment fund will help provide funds for retreats and trips such as the one we take each January for the March of Life in Washington, D.C.,” Baum said. “We are very grateful for this endowment that has been created to help the youth program.”

Contributions to the CAY Memorial Endowment Fund by families, friends, church and community members are welcome and can be made in the form of gifts of cash, securities or property at any time. Further information about the CAY Endowment Fund or other planned giving opportunities may be obtained by contacting Kim Cutlip or Patty Tennant at the Scioto Foundation office, (740) 354-4612 or by visiting the SF website at www.sciotofoundation.org.