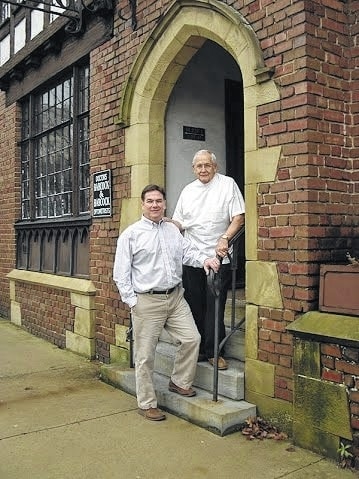 The Babcock family credits their success and the continuation of their business to the people of Portsmouth and the community that has continually supported them over the course of the past 100 years.

The story begins in 1916 with Joseph Babcock Senior, at 23 years of age he moved from Western New York to Portsmouth Ohio after answering a ‘Help Wanted’ ad. He partnered with Dr. James Bennett to open Bennett-Babcock Eye Care.

But at that time, optometry wasn’t regarded the way it is now. There were few colleges of optometry and degrees weren’t necessary for practicing.

“In 1919 he went to Illinois along with a bunch of other guys who wanted to be optometrists. They took a test and got their degree that way. It was like an apprenticeship,” explained Dr. Joseph Babcock the third, “In the years to follow, colleges would start to crop up at all the big schools in the country. He played a large role in getting the college of optometry started at Ohio State University.”

Babcock and Bennett had various storefronts located throughout Portsmouth until 1929, when they settled into a more permanent office on 6th Street. The practice operated for almost 80 years at that location until Dr. Joseph Babcock the third built the new office just across the street in 2008. A majority of the old building has recently been torn down, but entrance is currently standing.

Joseph Babcock Sr. had a brother who went to college at the University of Michigan to become an attorney. Shortly after, his brother joined the Army Air Corps during World War I. After the war, his brother went to work in Washington D.C. as the head of the Federal Trade Commission. It was through his brother’s friend and his ties to government, that Babcock Sr. was able to assist in creating legislation to build up the profession of optometry.

“In the 1930’s and 40’s when he was practicing here in Portsmouth, he was doing a lot of travelling to D.C. meeting with legislators, congressmen, senators trying to promote the profession of optometry. He was working here, and working there in D.C. to secure our profession,” said Dr. Taylor Babcock, the fourth generation of Babcock optometrists.

Babcock Sr. worked to get laws passed, and helped in getting optometrists commissioned for all branches of the military, he was instrumental with involving optometry in the the Veteran’s Association hospitals, the Social Security Administration and other organizations.

“It was through those connections via his brother, that he was able to do those things. And those accomplishments are the reason why he’s now being inducted into the Optometry National Hall of Fame, which will take place in June in Boston, Massachusetts,” said Dr. Taylor.

Dr. Taylor will be accepting the award on behalf of his great-grandfather.

He then went to the Ohio State College of Optometry, and after completion, returned to Portsmouth to work alongside Dr. Bennett and his father.

After his father’s passing in 1965, Babcock Jr. continued to work alongside Dr. Bennett. Bennett eventually retired out of the practice.

“He (Dr. Joseph Babcock Jr.) was really important in bringing contact lenses to this area, he was one of the first to fit certain contacts here. He was very active in the community as well and so was my great-grandpa,” said Dr. Taylor.

Dr. Joseph Babcock the third joined the practice with his father in 1981 after graduating from the Pennsylvania College of Optometry. Eventually, his father would go on to retire in 1993 at age 72.

“We’ve seen so many changes in the profession, things have evolved so much,” explained Dr. Joseph Babcock the third, “when my dad was in school, they studied anatomy and things like that, but they weren’t even allowed to use drops to dilate a pupil. Now we can treat disease and treat the health of the eye, I don’t think it will ever slow, it’s always going to move forward.”

Babcock the third maintained the practice and expanded their staff and services and in 2014, his son Taylor joined the team.

Taylor also graduated from the Pennsylvania College of Optometry. He and his wife Kelly are expecting.

“Who knows? Maybe she’ll be an optometrist too,” joked Kelly.

The Babcock family enjoys their work and the community that they’ve found in the Portsmouth region.

“Our biggest reason we’re still in business is because of the people of Portsmouth and our patients. We’re so fortunate to have such loyal, salt of the Earth people that come in and see us. We’re so thankful to take care of our friends, our neighbors and the people of Portsmouth and the surrounding areas and the ability to continue serving them and keeping their eyes and vision healthy,” said Dr. Taylor.

The office will be hosting an Open House in celebration on May 27 from 11 a.m until 1 p.m.

For more information about Babcock Eye Care, you can visit their web page at www.babcockeyecare.com, calling 740-353-2191 or by visiting their Facebook Page, “Babcock Eye Care.”