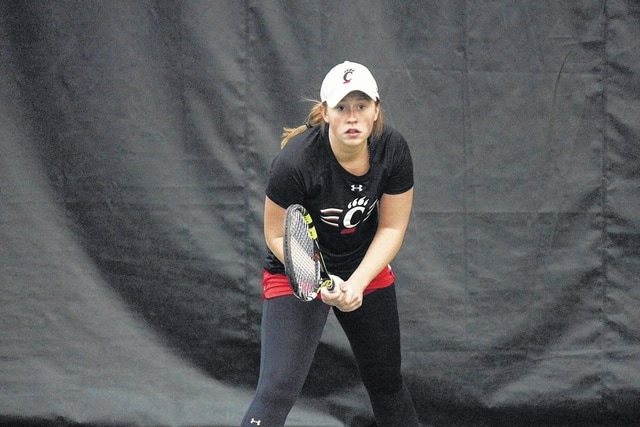 The rise to the top continues. Ali Miller routinely dispatched of her would be opponents on the tennis court when she attended Portsmouth High School. Now, Miller has taken the same philosophy to the University of Cincinnati.

Miller was named to the All-Conference team by the American Athletic Conference after her sophomore campaign. She was the only female from her squad to make the cut.

“That was definitely exciting,” Miller said.

Miller recorded an 11-5 record after spending the majority of the year playing in the No. 1 singles slot. As a doubles player, Miller and her partner, Lauren Bellinger of Dublin, Ohio, was ranked as high as No. 48 in the Intercollegiate Tennis Association (ITA) rankings.

“It’s exciting. We were the first doubles team in UC history to be ranked,” Miller said. “I definitely had a good year. It was definitely an exciting year for me.

“It was definitely a good year. I played all my doubles match at one doubles, which was exciting,” Miller said.

Miller’s high-school success translated quickly to college as she went 10-5 as a freshman with the Bearcats, playing primarily in the No. 3 singles spot. As a doubles player, she boasted a 6-8 record.

“I had a really good year for my freshman year,” Miller said. “We have a little bit of a stronger team this year than last year. We’ve been able to compete in a little bit higher of a field this year.

“My freshman year was a new experience for me coming into college. It was exciting to play in the top three of the lineup. I definitely enjoyed the team atmosphere that I had at college. I love my teammates. I have a great support system here at UC … “