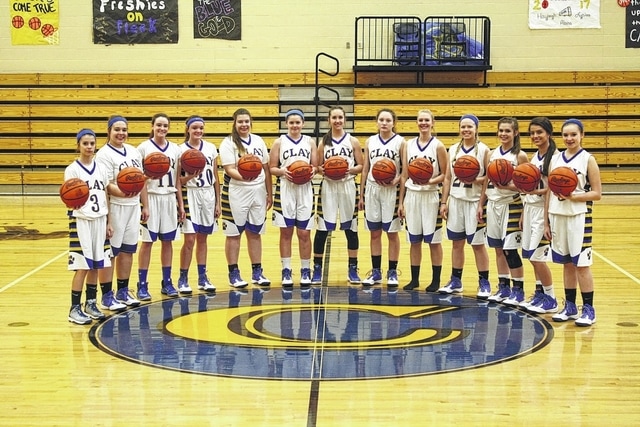 Aside from athleticism, most coaches pride themselves on fielding smart teams in their respective sports. For Lady Panthers basketball head coach Scott Cayton, aside from fielding a young basketball team, his squad wasn’t given full credit for their intelligence — until now.

The Ohio High School Basketball Coaches Association recognized the lady Panthers Thursday for boasting a 3.98 GPA after the first semester, which was No. 1 in the state of Ohio.

“These girls have their priorities in order and it comes from their families,” Cayton said. “The values that their families have instilled in them is education first. They are the true meaning of the word student athlete, where student comes first.”

Clay Principal Todd Warnock was elated to hear his students receive their recognition.

“I’m really proud of the kids and the fact they value their education because that is the real reason why they are here,” Warnock said.

Cayton admitted that his girls were focused throughout the year on their academics, often studying on local bus trips back to Rosemount after games.

“That just shows the maturity and the value system these girls have been brought up with,” Cayton said.

As much as Cayton wants to be on the winning side of the scoreboard, his first priority is to his kids in the classroom.

“This is my thirty second year teaching and to me, I’m a teacher first,” Cayton said. “I love coaching but most of my day is spent teaching and that’s where my priorities are, so to me, the fact that they excel in the classroom makes me more proud than a win on the basketball court.”

Clay will receive a plaque from the Ohio Army National Guard to commemorate the honor.

“As a coach and a teacher, I’m proud of them, and they should be proud of themselves as well,” Cayton said. “It think this sums up my girls pretty well. They’re going to be successful.”

“Probably the most important thing for me is that kids graduate and get a diploma, then go on and be successful. I’m proud of them and proud of what they’ve done,” Warnock said.

For Cayton, he admitted he’s had to stress the importance of academics to past basketball teams but he’s never had to relay that message to his current players.

“I think most coaches check on their player’s grades every nine weeks, and I do that too, but it was easy because I would check and they would all have ‘A’s,” Cayton said. “I don’t have to do too much when they take care of things themselves. I’ve had teams where we’ve really had to stay on the team and have study halls, but not with this team, they are self motivated in the classroom.

“From a coach’s perspective, you want well-rounded student athletes. That phrase sometimes gets made fun of, but that’s what we’re after, that’s why we’re here. Students come first for a reason.” By Chris Slone and Michael Hamilton