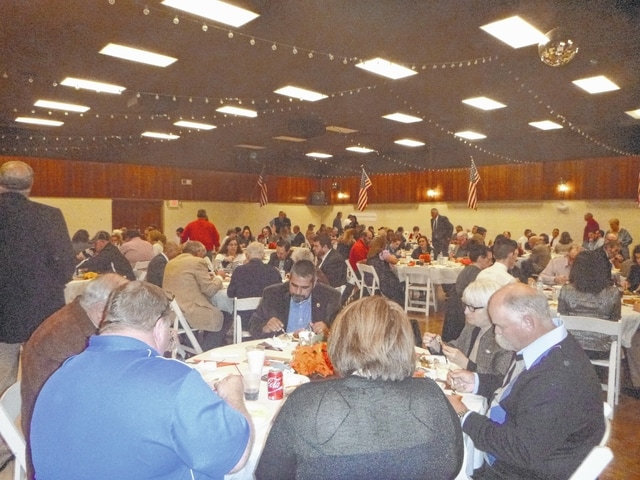 Beginning with a social hour followed by dinner, the event was called to order by Chairman Randy Basham, who introduced Scioto County office holders, elected officials, and candidates with much enthusiasm. In addition to Basham, the other officers of the Scioto County Party include Emily Cobb-Thomas, who serves as 1st vice chair, Jim Lintz 2nd vice chair, Melanie Ogg, Treasurer, and Angela Davis, secretary.

The first speaker, introduced by Basham was Lou Gentile. Gentile is currently serving on his first full tern in the Ohio Senate for the 3oth Senate District.

Gentile said that no one is able to succeed without the help of others, and gave credit to Ted Strickland, whom he worked with closely for a number of years.

David Pepper, Ohio Democrat Party Chair, who was unanimously elected Chair of the ODP and began his term on Jan. 1, spoke of new strategies for the Democratic Party.

“The most powerful issue in politics today, and it’s not just a democratic issue, the issue in America today is the issue of jobs and wages, and the middle class, and the people in the middle class feeling the squeeze as Ted Strickland talks about, and those who feel as though they can work as hard as they can, but they’re never going to get there,” Pepper said.”That is the issue of the day, and that is the issue that will elect the next president. Celebrate public service, starting with the local level. We want everyone to know that this party is about the public service. We have to be on message, all of the time, the reason our Presidential candidates, and people like Tim Ryan, and Ted Strickland, and Sherrod Brown, are effective, is because they are on message all of the time, be clear on what we’re fighting for, which is that economic chance for everyone, and to fight for it all of the time. We cannot have an infrastructure that gets excited once out of every four years, and then fades for three more.”

A special presentation of Democratic Hall of Fame honorees was conducted, in which Mary Hagler, who has served as a volunteer for the Scioto County Democratic Party for 60 years, and long-time volunteer, Dale Stanley were both inducted into the Hall of Fame. Both Hagler and Stanley were given plaques by Basham.

Tim Ryan, U. S. Representative for the 13th District, who was reelected six times, and is now serving in his seventh term, was the last speaker on the program.

“The number one issue is how we get Americans back to work in jobs that pay a decent, stinkin’ wage,” Ryan asked. “I can tell you that it is not going to happen with the same policies that we have been implementing over the last 30 plus years in the United States of America. If you look at every economic indicator, you will see that the top one percent has benefited. We are about putting in policies that will allow ordinary people to do extraordinary things, and that in my estimation is what it means to be a Democratic.”

Basham concluded the event with a bang, emphasizing the important issues to be cognizant of.

“We are in a new day for the Scioto County Democratic Party. Remember, the message is there, Worker’s Comp, Medicare, Social Security, 40-hour work week, time and a half after eight hours…Civil Rights, women’s rights, the list goes on.” Basham said.”Those are our talking points, and we are going to wake this county up in this next election coming this year, and we’re going to elect every one of these Democratic candidates that have put their name out there.”