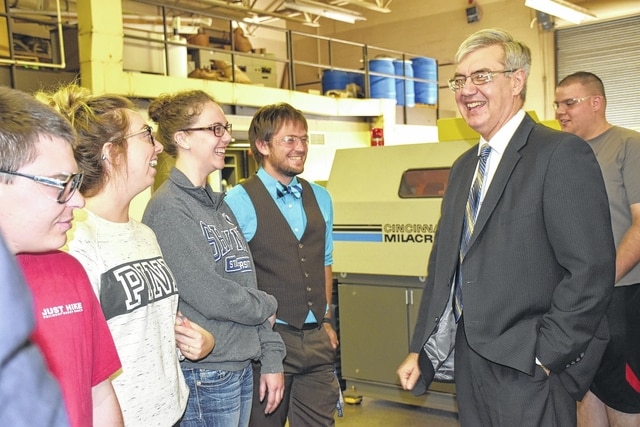 “I’m visiting with the student veterans while I’m down here,” Tansill told the Daily Times. “I am talking to them about their experience at Shawnee State which I understand is fantastic so far and I want to talk with them about what their plans are either in the military or when they get out of the military.”

Tansill said one of the functions of the Department of Veterans Services is to help unemployed veterans become employed across the state of Ohio.

Carey said one of the jobs at the Department of Higher Education is to visit campuses and visit with the presidents of those campuses as well.

“We brought down several of our staff members, along with the Director of the Governor’s Office of Veterans Services, to get to know President (Rick) Kurtz better and to see what’s going on here at Shawnee State University and highlight some of the partnerships that we have going on,” Carey told the Daily Times. “There are several things that we’re proud of with Shawnee State but one thing that Shawnee State was instrumental in was the Rapids Grant which takes a regional approach as far as workforce development.”

Carey said there is $8 million throughout the state for equipment that required partnerships between businesses, the four-year community colleges and career technical services.

“Shawnee State along with O.U. Southern in Ironton and Southern State in Hillsboro act as the lead agents to acquire the dollars, partnering with the Ohio Technical Centers in three targeted areas – Environmental Health and Safety for workers and students so they can learn how to engage in workplace activities safely. That will be led by O.U. Southern. Here at Shawnee they’ll be working on Events Manufacturing with the manufacturers in the region including the three service industries up in Jackson County including Belisio (Foods) and General Mills. Southern State will be leading the Health Care Nursing Initiative including a partnership here in Scioto County with the (Scioto County) Career and Technical Center and we are very excited about the level of collaboration.”

Kurtz said it is important to the university to be visited by Carey and his staff. Carey is a former assistant to the president at SSU.

“It’s an opportunity for us to showcase our institution,” Kurtz said. “Fortunately we have some history with the chancellor here. But since he was last here, things have changed a bit, so we want to show him some of the new initiatives we have going on in the different academic areas. We want to certainly be able to talk with him about our intentions this coming year and certainly they have helped make possible most recently our Rapids Grant.”

All of Ohio’s 37 public colleges and universities now have a single point of contact for veterans. That action came out of House Bill 488 passed in 2014. Every campus has one individual specifically set aside for veterans issues.