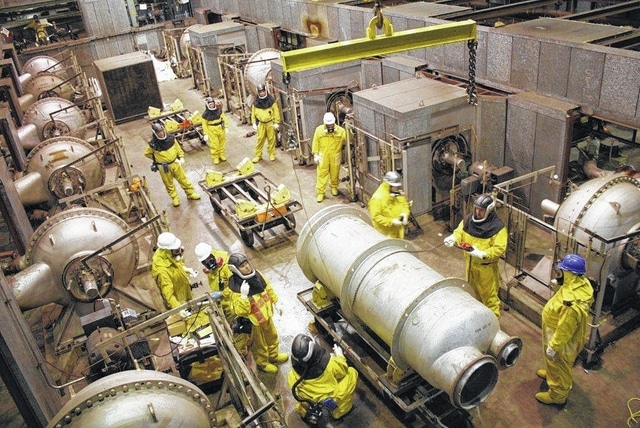 The city of Portsmouth recently calculated the possible loss of revenue from income tax should the worst case scenario occur at the Piketon Department of Energy reservation. Portsmouth City Manager Derek K. Allen told City Council he asked Portsmouth City Solicitor Trent Williams to check into the possible impact it would have on the city of Portsmouth if the American Centrifuge Plant project and/or the decontamination and decommissioning (D&D) project would be shut down.

“With the Centrifuge site, if that goes down, it looks like $40,000 of annual lost revenue,” Allen said. “And if they don’t continue with the cleanup portion, which I believe they will, that’s $100,000 of income tax on an annual basis.”

The county based their calculation of potential loss on the number of people from Scioto County working at each of the facilities.

The United States Department of Energy (DOE) announced it will end Centrus Energy’s American Centrifuge Test Demonstration and Operation (ACTDO) activity at Piketon, potentially resulting in the layoffs of 200 Energy Corp. employees. With a reduction in funding by the federal government, Centrus Energy Corp. announced their new reduced contract with Oak Ridge National Laboratory will not include continued operations of America’s only operating cascade of advanced uranium enrichment centrifuges in Piketon.

“We would have a scientific formula, but then again you can’t interpret people’s spending habits,” said Bryan Davis, Scioto County Commissioner. “We used different percentages of disposable income to calculate this. That’s a lot of money, but more importantly it’s about the people.”

Davis commented the journey to keep ACTDO in Piketon is not over.

“It’s not over, there are a lot of things being done to try to stave off the layoffs, we’re definitely against the clock,” Davis said.

Recently the Scioto County Commissioners, along with a delegation of southern Ohio representatives, went to Washington D.C. to meet with federal lawmakers and officials to lobby support for restored funding to Centrus and Fluor-BWXT.

“We’ve been in contact with our congressmen and senators as a follow-up to our visit, on some of the things we found out,” Davis said. “You have to understand Centrus is in negotiations with DOE on some potential ways to continue on.”

Davis explained the money necessary to keep ACTDO running has been allocated to DOE and they have chosen not to fund the work. It’s anticipated Centrus will begin layoffs in November.

Davis said something people are not realizing is the services Centrus provides to Fluor-BWXT.

“If ACP is closed, it will raise the overhead costs and expenses of Fluor, which throws us even more lopsided in the funding for D&D,” Davis said.

Davis said the fight is not over and if they have to go back to Washington they will.