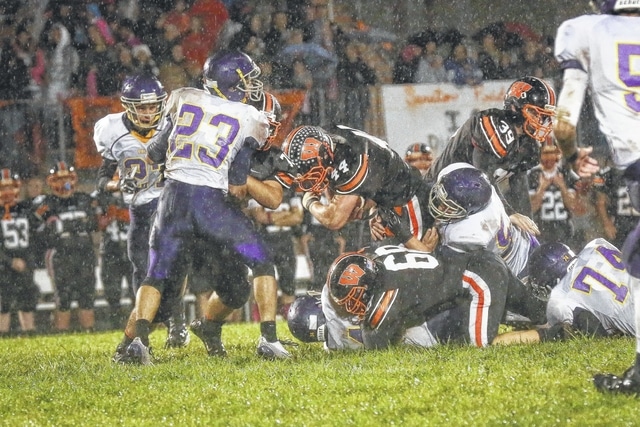 The Valley Indians and West Senators face off Friday. The Indians come into the game not unlike last year, sporting an undefeated 6-0 record, but hope to avoid another heart wrenching upset as West defeated Valley 34-20 at home. Friday’s game will be in Lucasville as Valley looks to stay undefeated and West looks to rack up another win in conference play.

Last week, Valley (6-0, 1-0) took a 35-0 lead against the Waverly Tigers before the Tigers’ second unit scored a pair of touchdowns for a 35-14 final. Rolfe was particularly sharp in the win, finding multiple receivers for scores.

Indians head coach Daren Crabtree praised Rolfe, but said his team has to stay balanced against the Senators in their upcoming game.

“We are almost even this year in terms of yards passing and rushing, which is a little surprising considering we normally run the ball more than we throw,” Crabtree said. “We expect to rely on our passing game because we have some great receivers and he (Rolfe) does a great job finding those guys, but we would like to stay as balanced as possible. We can throw the ball on first down, or second instead of just third down and long. I also think our play action sets up the run game very well. But our biggest difference this year is that we have much better defensive play. Last year we put up a lot of points, but we gave away many more than this year.”

Senator’s coach Ben Johnson understands the importance of coming out with a high motor against a very good Valley squad.

“It’s a big rivalry and the kids are excited,” Johnson said. “The energy level is high. We’ve been saying ‘Forget about what’s happened. We are undefeated in the league and we want to stay that way.”

Johnson also stressed how critical it is to take away Valley’s big play potential.

“Valley looks the same as they did last year almost. Most of the playmakers are back from last year. They are good in all three facets of the game. Their skill positions are playmakers. We are a bit different, we are a bit less experienced. But, our young guys are getting better and better each week. I’ve been telling them ‘Valley is very balanced, you can’t focus on just the run or the pass. You have to take away the big plays. They prefer to get their yardage from the big play.”

Valley averages almost 40 points per game while giving up only 12 points defensively. Coach Johnson realizes that protecting the football and limiting turnovers is another key to the game for the Senators.

For the Indians, Crabtree wants his squad to go into it expecting to win. However, he remembers the feeling after the upset.

“We have to learn from last year. They outplayed us. We didn’t prepare well, in fact, we had our worst week of practice. All of our players who returned remember the feeling. We’ve been getting each week, more mature, and last years’ experience will help them understand and avoid the loss. We are a year older and only two starters didn’t return from last year’s squad. But West’s football team is scary. They have struggled with injuries. We have to go out and show them respect.”

Both coaches seemed to agree that there will be little to no surprises in such a big rivalry game. Coach Crabtree summed it up, “We know each other so well. No surprises. Coach Johnson has been staying true to his game plan this year and we have to, too. Expect more of the same. This game is going to be a matter of execution.”

Reach Derrick Parker at [email protected] or on Twitter @DC__Parker