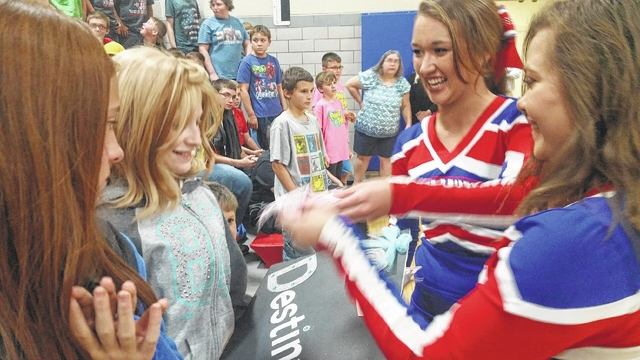 There wasn’t a dry eye or an empty heart in Northwest Middle School’s gymnasium Wednesday afternoon, as every student and faculty member came together to further honor a seventh grade warrior. At this same event, they followed their recognition by surprising her with the gift of a lifetime.

The student being celebrated was Northwest School District’s 2015 Homecoming Princess, seventh grade Destiny Freeland. The young Mohawk has been diagnosed with Ewing’s Sarcoma since she was eight-years-old, and has undergone many surgeries and trials since.

Arion Smith was Freeland’s teacher last year and has kept close tabs on her since. She is McDermott born and raised and has five years teaching under her belt.

“Destiny is very sweet,” Smith said. “She is very shy, but she loves the attention she has been getting. The other night, she told me that she feels beautiful and she has never felt that way. She keeps saying that experiencing these things are pretty amazing.”

Smith explained Destiny as having an amazing heart that is constantly dedicated to other people.

“Make a Wish sent her to the Mall of America last year. We were all very excited for her and talked about it a lot. When we would ask her what she planned on getting, she said that she wasn’t really sure of anything she wants,” Smith explained. “She said that she was mostly shopping for her little sisters. That is exactly the kind of person she is. Destiny is very selfless.”

The years of battling cancer have taken away her ability to cheer with her friends as a Mohawk cheerleader, but she has remained with them in spirit.

Knowing her love of cheerleading, the school reached out and finally contacted Wheelersburg native Lindsey Vaughn, who cheered with the Cincinnati Ben-Gals for many years.

Vaughn said she went all out, dreamed big, and planned an entire day for Freeland in the hometown of the Reds and the Bengals.

After a recent successful radio interview about her work for Freeland, Vaughn said she was immediately contacted by Cincinnati businesses and the Newport Aquarium, who all wanted to add to the young girl’s experience, making it a weekend of fun and high energy.

Freeland joined her classmates in the assembly on Wednesday, having no idea what was going on. The event kicked off with a photo slideshow of her Friday night fun as Northwest Local School District’s Homecoming Princess. School officials then bragged on their student body and spoke on how lucky they were to have Freeland with them. The entire attendance exploded in applause for their classmate, student, and friend.

Afterward, they welcomed Vaughn and she spoke on how she was touched by Freeland’s story and announced that she had a special gift for her.

Vaughn showed another video, this time of the current Cincinnati Ben-Gal squad, all speaking to Freeland directly and saying they were excited to meet her this weekend, during a special trip to the stadium. Students cheered and many cried at the grace that was being given to their friend.

Vaughn continued by telling Freeland what else awaited her this coming weekend.

Freeland’s weekend will include a trip to a Cincinnati Bengals football game, a trip into the Ben-Gals dressing room before the game, where she will help them get ready for the game, and she could possibly end up on the field with everyone else.

She will also have a weekend stay in a Marriott suite with meals provided at local restaurants. Newport Aquarium also reached out and will be opening to her an hour early. Everything at the aquarium will be about her, where she will be receiving a one-on-one tour of the facility and its animals. She will also get the opportunity to play with the penguins.

Vaughn wrapped-up her time at Northwest by hugging Freeland and giving her a bag full of Bengals gear, as the Northwest Cheerleaders presented her with gifts of their own before performing for the school and guests.

“Cheerleading has played a vital role in my life,” Vaughn said. “I felt like I needed to get involved in making this happen for this little girl who is so special.”

Vaughn said that she has enjoyed working with her friends in Cincinnati to make a dream come true for a girl from her neck of the woods.

“I am not surprised at all by the generosity of the people from Cincinnati,” Vaughn said. “When I was a cheerleader, I was involved in like nearly 30 charities a year. Even though it is a city, it is full of people with big hearts. I am thrilled by it all, but not surprised.”