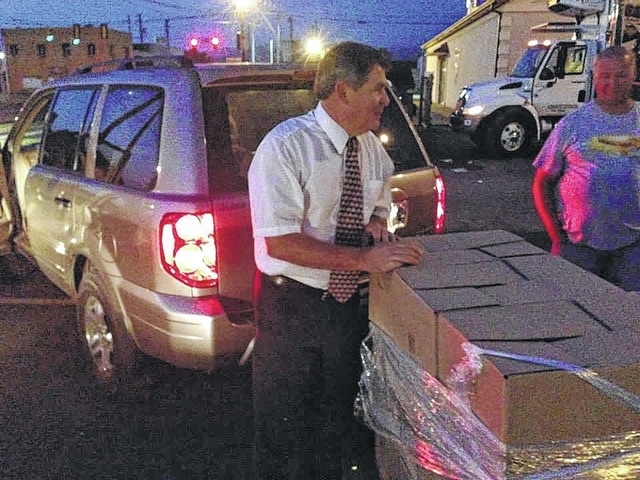 Most people know of the Steven A Hunter Hope Fund and the Steven’s Power Packs they provide to feed over 750 elementary school kids in Scioto and Pike Counties. Not many are versed, however, on what the Hope Fund accomplishes during the summer months to combat the food scarcity directly correlated with the child poverty rates of the area.

The reach of the Hope Fund has spread like wildfire, starting from Portsmouth City Schools, then to all of Scioto County, finally to Pike County, leading to a possible future of even more growth.

When founders Mark and Virgie Hunter began the program, which is in honor of their late son, they only had the idea of assisting the needs of Portsmouth children, but have since grown the program to focus more on the hunger that plagues youth all over the region.

Steven’s Power Packs started the organization’s food program. The packs contain enough food to get a student through the weekend, but hunger doesn’t just exist on the weekends of the school year. In more recent years, the Hunters have begun looking at summer options and, most recently, onsite school pantries. Thus, the Summer Innovative Meals program was started in Scioto County.

Executive Director Mark Hunter stated that the summer program is radically different from the backpack program. The summer program is held in more rural parts of the county. Distribution sites take fresh produce and packaged meal items and give them to the families of school children in need.

“The governor funded this program across the state, because he realized there was a problem with distribution. Children in urban areas can walk and, within a few blocks, have access to a church or community center to receive help. In rural America, it doesn’t work that way, because there are miles and miles between these locations. Also, these families have either no transportation or unreliable transportation,” Hunter explained. “Most struggling families cannot drive daily to receive a peanut butter sandwich.”

To help children in the rural setting, distribution sites operate for one day a week and parents get everything they need for the week in one trip.

The Hope Fund’s summer programming supplied food rations to 600 children for ten weeks. During the ten weeks, 70,000 pounds of food was delivered, along with around 80,000 pounds of fresh produce.

“It has been wonderful. In all my sites, I have educators—principals, administrators, teachers— who are all so excited to be in a position to help the families and the kids who need help during the summertime. They all go on to tell me that this program goes beyond supplying children with their nutritional needs through food, but it also gives them these interactions with the kids, because kids go with parents most of the time. The teachers say it is a game changer in the fall, because these students acknowledge the teachers are there for them and their relationship is that much more special.”

For once, the summer distribution program had no growth, but also no decline, between this year and last, but an additional outlet was offered that allowed more families to receive help.

Hunter was excited to see an entirely new facet to his program take hold in Northwest School District, which was in the shape of a pantry. The school was glad to accept a food pantry onsite, which will continue throughout the year, feeding around 75 families a week. The pantry was funded by a Disney grant.

Hunter claimed he is looking at the possibility of opening similar pantries in other rural schools throughout the county.

“We would eventually like to see models like we’ve developed in Northwest pop up in other schools. It is dependent on funding, but it is the hope and dream,” Hunter said. “We will be looking at rural areas, because most places around Portsmouth have pantries and other outlets for assistance.”

The state funding for the summer assistance program will reach its end after this year, leaving the future of funding yet to be determined. Hunter said that he is hopeful that it will be awarded for another period of time, but believes that people will work to achieve the goals of the program, even if the funding isn’t provided by Ohio.

“I could see Freestore Foodbank (the Hope Fund food providing partner) finding other avenues to fund something like this, because it is a model that they are very serious about. They are so serious about it, that they are looking to fund the Northwest pantry through a grant themselves, so that it can stay open throughout the school year.”

Hunter said that he is happy with the direction of the Hope Fund, stating that children in rural areas should be much more comfortable in their nutritional needs.

“Power Packs are a safety net,” Hunter said. “They are there to get the kids, who have little to nothing, through the weekend. The pantry will be giving them actual staples to get them through the rest of the week.”

Outside of the Northwest food pantry, the Hope Fund’s summer programs have come to a close for the year. Steven’s Power Packs have begun being dispersed throughout the reach of Scioto and Pike Counties, to the many hundreds of children who receive food through the generosity and kindness of Mark, Virgie, Freestore Foodbank, and the many local benefactors who make it possible.