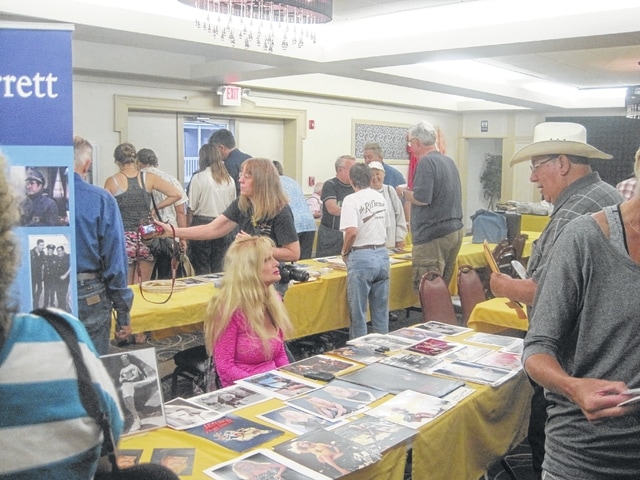 “It has been great to be here where my dad was raised,” Patterson said, as she attended the opening of the dealers room at the 32nd annual Roy Rogers Festival held in the Holiday Inn in Portsmouth. “I love coming here. We’ve gone out to the (boyhood) home (on Duck Run) just about every year. We talk about some of the stories he told us and we think about how they grew up. So it gets us back in touch. It’s like coming home now.”

Vendors laid out their collections and took the opportunity to tell their stories to everyone attending the event.

“I have a lot of 8-by-10 black and white (pictures) of the different cowboys and like Elvis and Marilyn Monroe as well,” Beverly Moore of Atlanta, Georgia said. “I have some of these trading cards of Lash Larue and Rex Allen and Roy Rogers and the different cowboys that we knew in the movies. It tickles me because I really met those people. I met Roy and Dale and I met Rex Allen and Eddie Dean.”

Collecting cowboy paraphernalia is not new to Moore.

“I’ve been doing this since I was six years old,” Moore said. “I’m a big fan of the cowboys. My brothers say, ‘aren’t you ever gonna grow up?’ and I say I hope I never do.”

Lynn Hubbard has a cause that is near to her heart.

“I’m an author and publisher, and I’m here representing our veterans today,” Hubbard said. “I’m collecting donations for a PTSD (Post Traumatic Stress Disorder) project I’m working on. PTST is running rampant and it’s a collection of person stories from veterans. I’m putting them together in a book and I’m going to be distributing the book across the country to veterans hospitals.”

One of the best known citizens of Scioto County, Dr. John Simon, had his table containing his books set up for the event as well. Simon finished writing a book about Roy Rogers’ boyhood that had been started by his sister, Cleda Slye Willoughby last year.

“Cleda got cancer and she was my friend and she called me and said she had the book partly written but I don’t think I’m going to live to finish it and she asked me to finish it,” Simon said. “At the time I was writing Cowboy Copas which took me 10 years. So I didn’t do anything on this (Roy Rogers book) until I got that (Cowboy Copas book) finished.”

George Uppling publishes The Wagon Way a newspaper with a western theme.

“We’re here to try to promote our Wagon Way,” Uppling said. “I’ve been hauling horses all over the country for years and doing stories on trail rides and wagon trains.”

From the “A Team” to “Knight Rider” to “Daniel Boone” and even “Fantasy Island,” you would be hard pressed to find a TV series or even a movie that Russ McCubbin was not in.

“I have been to 23 of these (Roy Rogers Festival),” McCubbin said. “I live in Charleston, West Virginia. I left Hollywood in 1992. When you get old they run you off.”

Hank Garrett has done between 275 and 280 movies and TV series over the years. His most famous role was in the TV series “Car 54 Where Are You?”

“I raise funds for disabled American veterans,” Garrett said. “I won the New York Film Critics Award for a movie with Robert Redford called ‘Three Days of the Condor,’ and I have the video. I autograph it and personalize videos of ‘Car 54’ that no one else in the world has. So far I have raised over $40,000 for the vets and I will continue doing this.”