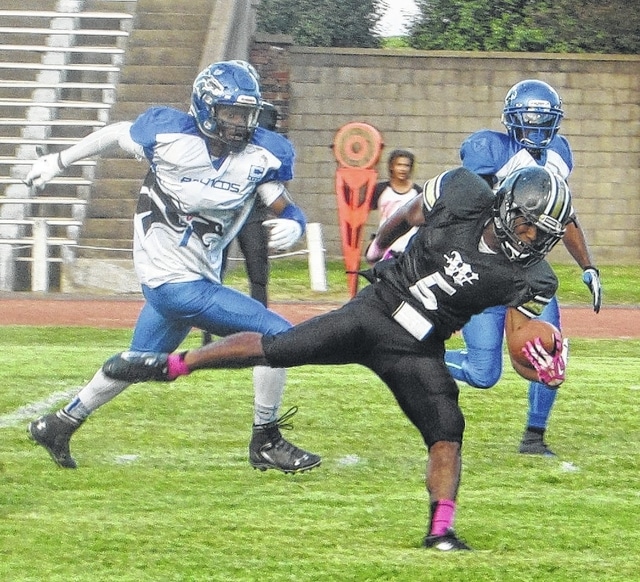 For the second time this season, the Portsmouth Warriors made quick work of their cross-town rivals in the “Battle for Portsmouth.”

The Warriors (9-1) scored five first-half touchdowns and limited the Southern Ohio Spartans (7-3) to just a single rushing yard in a 38-8 win in the regular season finale at The Complex in West Portsmouth on Saturday evening.

The Warriors grabbed control of the game from the get-go. After a Warrior interception gave the offense excellent field position, running back Jontez Jones capped a four-play 32-yard drive with a three-yard TD run to give Portsmouth a 6-0 lead just three minutes in to the game. Jones would later add a 53-yard TD scamper and finish with 101 total rushing yards on the evening, giving him a total of 1,165 rushing yards for the season. He averaged 9.5 yards per carry throughout the regular season.

The Warriors had no problem running the ball against the porous Spartan defense — Portsmouth picked up 217 rushing yards throughout the game. But that didn’t stop quarterback Justin Lunsford from airing it out. The veteran signal-caller tossed two touchdown passes (a 32-yarder to Mike Dawkins and a 38-yarder to Jermaine Payton) on his way to a 6-for-8, 115 yard day.

Despite jumping out to an 18-0 lead, the Spartans found a way to hang around in the first half. They pieced together a seven-play, 63-yard drive in the middle of the second quarter to cut the deficit to 10. Jonathon Schweickart’s 13-yard pass to Alex Meeker that brought the Spartan deficit to 18-8.

Spartans again had a chance to cut into the Warrior lead as the first half expired, but Schweickart’s Hail Mary attempt was intercepted by the Warriors’ Chance Freeman in the end zone. Freeman took advantage, returning the pick 102 yards for a touchdown to give Portsmouth a 32-8 halftime lead.

With the game all but decided at halftime, the Spartans requested a running clock for the final two quarters. Though the Warriors ran less than a dozen plays in the second half, they still managed to find the end zone when backup QB Charlie Morton found Andre Canada for a 34-yard touchdown pass.

According to Rice, Saturday marked the “fourth or fifth” game this season that the Warriors scored more points in than the amount of plays they ran in a game. Portsmouth scored 38 points in Saturday’s game and ran just 27 plays.

With the win, the Warriors wrapped up the top seed in the upcoming Blue Collar Football League playoffs and home-field advantage throughout the postseason. The Spartans, who had clinched the No. 3 seed in the playoffs prior to Saturday’s game, will take on the 2-7 West Virginia Bulldogs next weekend in the first round in West Portsmouth.

If the Spartans can find a way to get past the Bulldogs, they would take on the Warriors in a third and final “Battle for Portsmouth” on Aug. 15 at Spartan Stadium.

Because the Warriors won’t be in action for another two weeks, Rice is taking preemptive measures to make sure his team won’t be rusty when they begin their postseason run.

“We’re going to practice Saturday and Sunday. We have a few things for the stretch run that we need to work on,” Rice said.