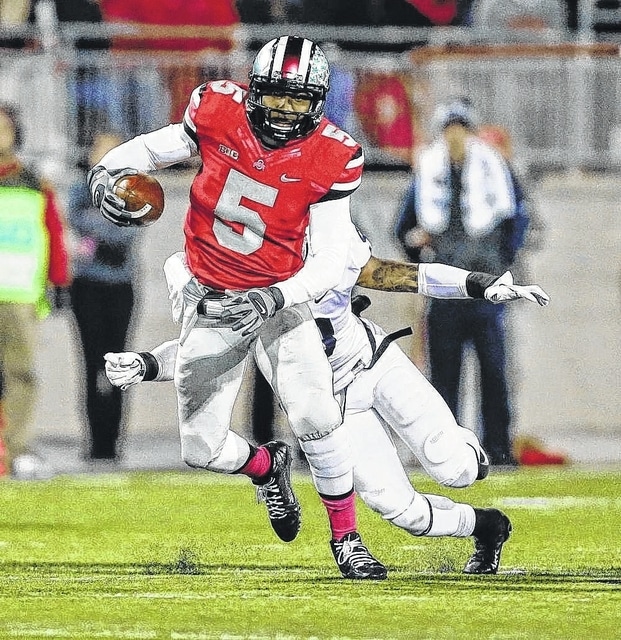 COLUMBUS – It was probably the best-kept secret in Ohio State football in a long time.

While the suspension of some players had been rumored on the internet for weeks, the news that quarterback Braxton Miller had been working out at wide receiver for a month before he announced his position change stayed within the wall of the Woody Hayes Center.

No one saw that coming. So, how did a leak-proof level of secrecy that would make the CIA envious happen?

Basically, Urban Meyer said no one should talk about it. And, with the rare exceptions like the team rules violations that got four Buckeyes suspended for the Virginia Tech game, that’s all it takes.

“We were trusted not to tell anybody about that and guys did a pretty fantastic job of it,” linebacker Joshua Perry said at last week’s Big Ten Football Media Days.

Turning serious, he said, “We’re just loyal to the team. If coach says don’t do something, you don’t do it.”

Two other Big Ten quarterbacks, both fifth-year seniors like Miller, were impressed, too. But it was Miller’s ability to make a late-career position switch that they were talking about at Big Ten Media Days.

Wisconsin’s Joel Stave said he started out as a receiver when he was younger, but couldn’t see himself going back to catching passes.

“When I was a kid I really liked playing wide receiver. My older brother was also a quarterback and he had an absolute rocket arm. He could throw it so hard. I used to like

going out and running routes for him,” he said. “There was a time I wanted to be a wide receiver but I just kind of naturally made the transition to quarterback.”

Stave called Miller “as good as anybody in the country” when he runs the ball.

“What he can do with the run is pretty incredible. What he’s done in three years as a starter when he pulls it down and runs is as good as anybody in the country. It will be fun to see what he can do, starting at wide receiver. I think you put the ball in his hands and good things will happen,” he said.