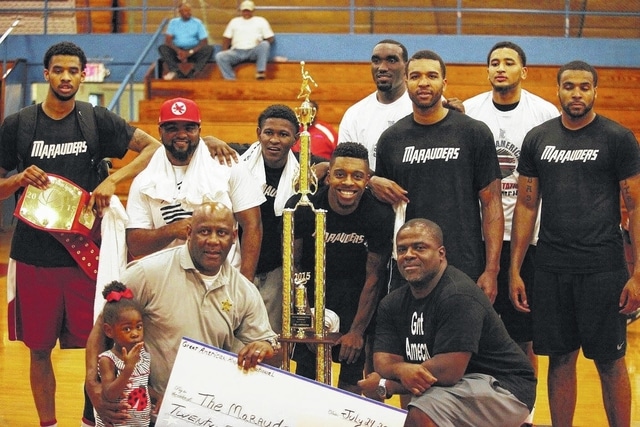 The Mauraders — a team that included Portsmouth High School graduates Andrew Bendolph and Anthony Williams and was coached by Portsmouth resident Mark Bendolph — defeated the Made Men 117-107 in the championship game on Saturday. The Mauraders also included Evan Ravanel, a former member of the Ohio State basketball team, and Julian Sullinger, the brother of NBA star and former Buckeye Jared Sullinger.

Jared Sullinger was in attendance during Saturday’s game to watch his brother take home the trophy.

Brice Kearns, another former Portsmouth Trojan, was a part of the second-place finishing Made Men team.

The Great American Hoops Invitational featured 10 teams in a double-elimination style tournament. There was no fee for teams to enter the tournament. Organizer Troy Parker said that players and fans initially thought the event was too good to be true, but he said interest and attendance began to rise as the tournament progressed.

“A lot of people didn’t believe it was real, something like this had never happened like this in city,” said Parker, a Portsmouth native. “The first weekend was pretty light, but you could see it kind of pick up every weekend. The championship game had very good attendance.

“We’re hoping there will be a big turnaround next year,” he added.

Parker hopes that he can continue to hold the Invitational in Portsmouth, next year and far into the future.

“It put the spotlight on Portsmouth,” Parker said. “It feels good that people from outside of the city got to see us in a positive light…I feel good knowing that I did something to help the community out.”