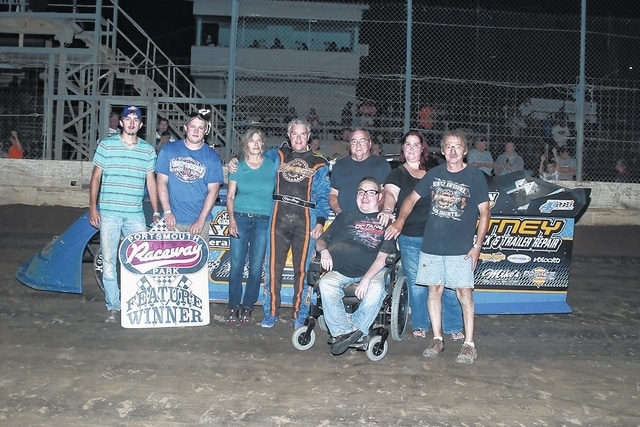 After a three-week layoff, Portsmouth Raceway Park got back to action, and there was certainly plenty of it.

Three-time track champion Kenny Christy returned to winner’s circle in the Late Models. Brian Skaggs took the checkers in the Modifieds. Mike Meyers grabbed yet another victory in the Limited Lates, and Jason Spillman captured another win in the Bomber Division.

Christy put an exclamation point on a feel-good story by taking the win in the Giovanni’s Pizza Late Models. The victory came nearly 13 months to the day of the passing of his brother and crew chief, Rick Christy. For Kenny, the victory was his first since losing his brother.

“He was here,” Christy said in victory lane.

Christy’s win was well-earned. Driving a Swartz by Boggs Chassis, Christy posted the quick time in time trials and started fourth in the feature, but things didn’t look too promising early on in the A-Main. Christy fell back to sixth on Lap 7 but then began mounting his charge.

Using the inside line, the Vanceburg, native climbed back to fourth on Lap 8. He moved to third on Lap 12. He took second on Lap 16, and grabbed the lead from Brandon Fouts on Lap 17. Once Christy got the lead, he pulled away to take the victory.

Fouts had a great run. He led the first 17 laps of the 25-lap feature en route to a runner-up finish. Wheelersburg’s Josh Bocook had his best showing of the season placing third. Stephen Breeding and Shannon Thornsberry rounded out the top five. Audie Swartz, Billy Gullion, Kenny Howell, Kevin Wagner, and Michael Wright made up the rest of the top 10.

Delmas Conley entered the night as the points leader but struggled with car problems throughout the evening. Conley wound up dropping out of the race and finishing 18th. His misfortunes handed the points lead over to Kevin Wagner.

Brian Skaggs held off the competition in a hard-fought Modified A-Main. Skaggs inherited the lead from Ervin Vance on Lap 9 as Vance’s car broke down under caution just prior to a restart.

After a flurry of accidents early in the race, the final eight laps went caution free. The top three pulled away from the rest of the pack and finished nose to tail, as Skaggs outgunned Tony DeHart and Craig Christian. Adam Colley, Adam Jordan, Tommy McClain, Jody Puckett, Drew Bender, Brianna Robinson, and Kenny Aldridge made up the rest of the top 10.

There were some great individual stories stemming from some of the Modified drivers finishing in the top 10. Tommy McClain was the Markwest Ranger Pipeline Hard Charger, as he advanced 14 positions. Teenager Brianna Robinson represented herself well with a top-10 placing. Drew Bender had a top-10 run in a new car he brought to PRP for the first time. DeHart’s second-place finish came in a car which he had only raced twice at Portsmouth Raceway Park.

Of all the warm and fuzzy tales from the track, one of the best stories was regarding Kenny Aldridge. After a bout with cancer, he managed to crack the top 10 less than a week after learning he was cancer free.

While the night brought a lot of uplifting storylines, the bulk of the emotion which came from the O’Reilly Auto Parts Limited Late Model A-Main seemed to result from anger and aggravation. This 15-lap feature was a slugfest that led to a lot of bent sheet metal, but one guy who managed to get through the race without a scratch was Mike

Meyers. The Fayetteville driver led every lap on the way to his fourth PRP win of the season.

PRP’s next race will be The Keaton’s Collision Center Mod Squad Spectacular scheduled for this coming Saturday, August 1st. UMP Modifieds will be racing for $3,000 to win. Also on the card will be Late Models, Limited Lates, and Sport Mods. Gates open at 4 p.m. with racing at 7:30.