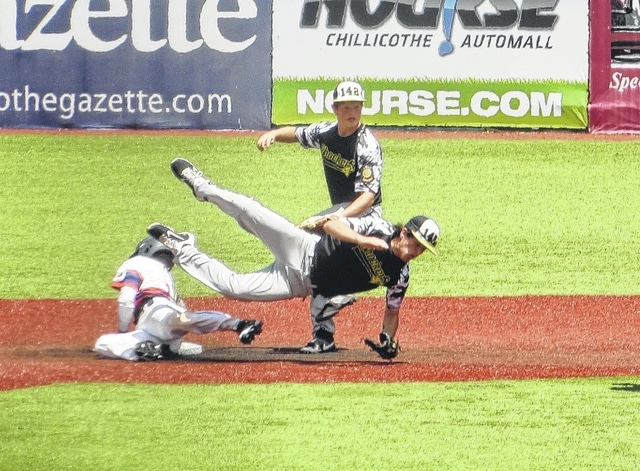 CHILLICOTHE — The Waverly Legion Post baseball team suffered their first loss of the Region 5 tournament on Wednesday at the hands of Yeager Post 199 (Harrison). The Shockers fell 10-0 to the reigning regional champions in eight innings at VA Memorial Stadium.

Yeager didn’t waste any time, as leadoff hitter Jordan Ramey reached base with an infield hit. The Post 199 speedster then proceeded to swipe second and third base before being brought home with a sacrifice fly for the game’s first run.

Shocker starter Pierce Knisley wasn’t fazed by the early run. He responded by throwing five innings of shutout ball, including a stretch where he retired 13 of 14 Yeager batters.

But the wheels suddenly came off for Knisley the bottom of the sixth inning. Yeager batted around, sending 10 hitters to the plate, smacking five hits. The back-breaker was delivered by Yeager pitcher Shane Smith, who roped a Knisley pitch down the first base line for a two-RBI triple. When all was said and done, Post 199 had scored five runs in the frame and taken a commanding 6-0 lead.

At the plate, Waverly couldn’t get anything going against Smith. The Shockers managed just a single hit on Smith throughout the game, a single by Joe Henderson in the second inning. Henderson then moved to third base on an infield error by Yeager, but Sky Oliver would followed with a strikeout to end the inning.

After Henderson’s hit, Smith would retire 19 of the next 21 Shocker hitters to seal the win. Smith went all eight innings, striking out five batters while allowing just one walk.

With Post 199 leading 7-0 in the bottom of the eighth inning and needing three runs to end the game early, Yeager banged out four hits to seal the win. Catcher Sam Haver came up with the game-ending RBI that scored shortstop Kyle Orloff.

Though the loss did not eliminate Post 142 from the Region 5 tournament, it forced them into a elimination game with Chillicothe Post 757 on Wednesday evening, the winner of which would need to win two games against Post 199 on Thursday to earn a Regional championship.

The Shockers led the Colts 2-1 after six innings in the late game. The winner of Wednesday’s late game will face Yeager tomorrow at 3 p.m., with a second game to follow if necessary.