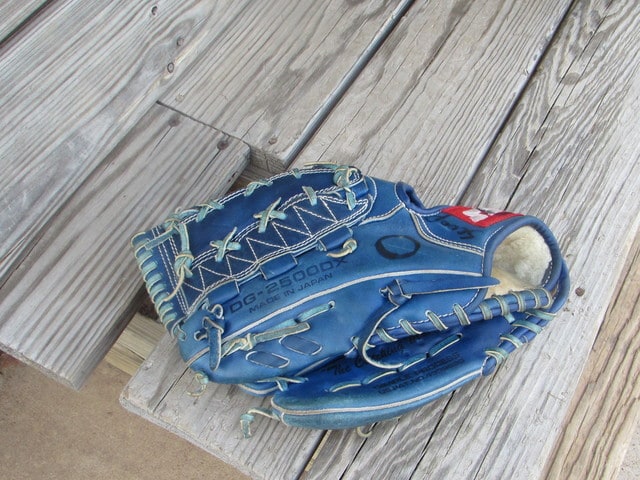 As a baseball player, Sky Oliver always tries to emulate All-Star grandfather, Al. This season, he took it to a new level.

While rummaging around earlier this year, Sky came across one of his grandfather’s old ball gloves from his playing days. According to Al, he used the glove during his time with the Texas Rangers between 1978 and 1981. During that four-year span, Al used the glove to snag hundreds of fly balls while patrolling the Ranger outfield.

Though the SSK Sasaki glove hadn’t been used in years and was marked with his grandfather’s nickname “Scoop” (Sky goes by the moniker “Juice”), the younger Oliver figured he’d give it a go. After all, the blue leather matched the uniforms of his Portsmouth Trojans.

It didn’t take long for Sky to get used to the glove.

“It was a luck thing. I found his glove right before the season, and as soon as I found it, I started hitting well. I just kept using it,” Sky said.

Sky used the glove throughout the 2015 high school baseball season while leading the Trojans to a winning record and a spot in the sectional finals. He was named first team All-OVC for his performance this season and committed to Rio Grande for both baseball and basketball.

Sky has continued to use the glove since joining the Waverly Post 142 baseball team, and his hot streak hasn’t let up. Batting in the ninth spot for the Shockers, he’s hit .351 and driven in 12 runs while only striking out twice.

Perhaps Al’s old glove has a bit of offensive magic in it. In his four years with the Rangers, Al never hit below .309 and earned the Silver Slugger award twice.

Sky also feels the glove has given him an edge on defense.

“Last week I was playing center field, I made a couple of (nice) catches,” he said.

Every time Sky takes the field, he knows he’s taking a piece of baseball — and family — history with him. And though he can’t remember any specific stories his grandfather has told him about the glove, it isn’t because he hasn’t heard them before.

“He tells me stories all the time,” Sky said with a smile. http://portsmouth-dailytimes.aimmedianetwork.com/wp-content/uploads/sites/28/2015/07/web1_IMG_6885.jpg
142’s Sky Oliver is playing with a piece of baseball history