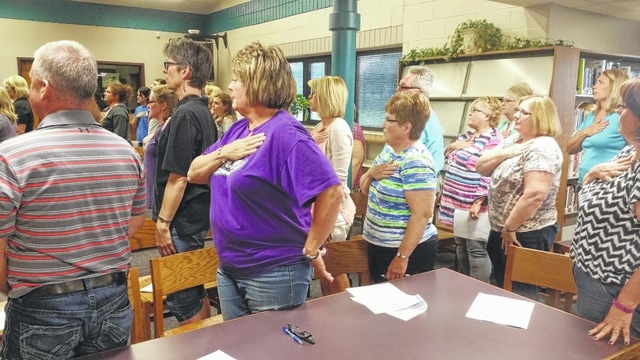 Joseph Pratt | Portsmouth Daily Times The crowd in attendance of Wednesday’s VLSD Board meeting during the citation of the Pledge of Allegiance.

The Valley Local School District Board of Education met Wednesday, July 15 for a regularly scheduled board meeting. Among the many topics of discussion was the formal acceptance of the resignation of Carl McCrory, superintendent of the school district.

McCrory submitted his formal resignation to the board last week and has been waiting for it to be accepted at this meeting. The decision to leave superintendency was for a handful of reason, according to McCrory. He explained that he and his wife had been praying for a sense of direction, when a principal position opened in another district that he felt would be a good transition for himself and his family.

With the announcement of his exit, parents became concerned and started rallying each other. A petition went around calling for the board to go into negotiations to keep McCrory and another group of people arose to argue that the board should simply accept the resignation. The Valley High School Library was packed at the meeting, with people of all sorts collected to hear the decision and ready to speak.

The Valley Board of Education voted on his resignation, after an extensive executive session. All members voted to accept the resignation, other than President Troy Gahm, who chose to abstain.

No one in attendance had anything to say directly about McCrory’s current situation, but few wished him farewell and goodbye.

McCrory speculated that the interest in his departure came from rumor mills and the sudden announcement of his departure.

McCrory said that the decision to leave Valley might have appeared to come out of nowhere, with his resignation being submitted a month before the start of school, but he claimed the decision to get back into education, in a different role, has been one he has explored for a while and he had no ulterior motives behind the decision.

McCrory explained that the decision to leave came from two different directions, one was time and family constraint and the other was in the line of work itself.

The superintendent said that he recently watched his daughter graduate high school and it caused him to reflect on life. Realizing that he was missing out on life events, sporting events, and other aspects of family life, he felt the need to find something different that would allow him more time to be with his family.

“My wife and I began reflecting on our values. We like superintendency, as well as being heavily involved in the community, but we realized it was a heavy commitment that takes away from family,” McCrory said. “Family is one of the most important things god gives you and once that time is gone you never get that back. We realized we needed more time with our own kids.”

McCrory also attributed the work itself as a reason he wanted to leave.

McCrory claimed that he might look into superintendency again later in life, but once he has raised his kids and after he has served as a principal a little longer.

McCrory said that he hopes to leave Valley in good terms and is also happy to leave the district in good standing.

According to McCrory, since he has been superintendent, the general fund has grown from $700,000 to over $4 million, over $900,000 in capital improvements have been made, a new fleet of buses has been purchased, technological offerings have grown, utility partnerships and rebate opportunities have advanced, and more.

“Workloads increased some, less spending was enacted, but I’m leaving the school in good standing now that they have things updated and have a generous general fund established,” McCrory said. “Now that things are the way they are, I’m sure the next superintendent can be a little more liberal with expenditures.”

Valley Local School District Board of Education President Troy Gahm said that the board members are currently considering their options in the search for an interim superintendent. A special meeting of the board has been scheduled for July 22, 2015, at 7 p.m., in the Valley High School Library. Gahm also said he will begin discussing options with the South Central Ohio Educational Service Center and the state for locating an adequate interim.

“I’m really heartbroken over him leaving, I really am,” Gahm said. “I think he did wonders for our school. We have almost 4.4 million dollars in the bank and we’ve not had that with eight other leaders. The district was wonderful while he was here and I wish we could have worked something out to keep from this.”