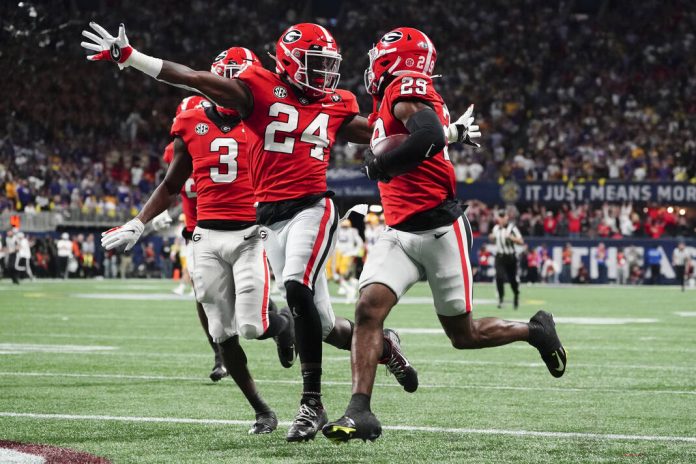 For this college football season, the BCS probably would have been fine.

Two days after the College Football Playoff announced it is expanding to 12 teams, the field of four to determine this season’s national champion included two schools that did not even win their conferences.

Georgia, Michigan, TCU and Ohio State were selected Sunday for the playoff, giving the Big Ten multiple programs in the four-team field for the first time.

The top-ranked and reigning champion Bulldogs (13-0) and fourth-seeded Buckeyes (11-1) will meet Dec. 31 at the Peach Bowl in Atlanta.

Ohio State got a reprieve, moving back into the top four after losing to Big Ten rival Michigan just a week ago.

“How we got here, at this point, I guess doesn’t really matter now that we’re here,“ Ohio State Ryan Day said.

The second-seeded Wolverines (13-0) and third-ranked Horned Frogs (12-1) will play at the Fiesta Bowl in Glendale, Arizona in the first game of the New Year’s Eve doubleheader.

The Horned Frogs were third coming into the weekend, but had to sweat out their spot Saturday night after losing the Big 12 title game to Kansas State in overtime.

“I was really nervous,” TCU quarterback Max Duggan said about watching ESPN’s slow rollout of the pairings on Sunday afternoon.

The Frogs had nothing to fear.

They had already built enough equity to stay in the top four, and they erupted with cheers of relief at their watch party in Fort Worth, Texas, when it became official.

The playoff was born in 2014 from the constant controversy and complaining about the Bowl Championship Series, and how deserving teams would often be left out of the 1 vs. 2 postseason game it created.

This year, a Georgia-Michigan game would not have generated many complaints.

Georgia, which won the Southeastern Conference championship game in a rout, is a 6 1/2-point favorite against Ohio State, according to FanDuel Sportsbook.

Michigan, which took the Big Ten title, is favored by 9 1/2 points over TCU.

CFP selection committee chairman Boo Corrigan said the 13-member panel went through its usual process of grouping teams in threes to compare them for the final rankings, but not for long.

“I can’t actually remember which team got pulled in for the third, but as we went into it, we wanted to make sure we got those first two set and then we moved forward,” said Corrigan, who is the athletic director at North Carolina State.

The national championship game is Jan. 9 at Sofi Stadium in Inglewood, California, and because there will be four teams and not just two, it could be a rematch of rivals Ohio State and Michigan in what will soon be Big Ten country — as the conference expands with UCLA and USC.

The Buckeyes and Wolverines have never played outside of their annual regular-season game in a bitter rivalry that dates to 1902.

The most interesting part of Sunday’s unveiling was whether the committee would pair Michigan and Ohio State in the semifinals and whether Alabama might be slip in as the first two-loss playoff team.

“I truly believe that they got it right,” first-year TCU coach Sonny Dykes said. “Conference championship games, I don’t think you should be punished for playing in them. But you never know just how those conversations are going to go.”

In the end, the committee sprung no surprises.

The rest of the New Year’s Six bowls were also set:

* Tennessee vs. Clemson in the Orange Bowl on Dec. 30.

That’s an appealing slate, but with no championship stakes the question Crimson Tide coach Nick Saban already faced on Sunday was: How many of the Tide’s best players will play?

“I’m hopeful that players will see this as an opportunity to create value for themselves, even if they’re older players and have a chance to get drafted this year and come out — whether they’re seniors or juniors,” Saban said in an interview with ESPN.

Shuffle some of those bowl matchups around to fit the new 12-team format and turn them into playoff games and they would be a lot more appealing — and a lot more valuable.

Expansion becomes a reality in 2024.

Ohio State was given a second life in the four-team playoff race when Southern California lost the Pac-12 championship game on Friday night to Utah, and the Buckeyes were deemed the best of a flawed batch on contenders.

Alabama (10-2) was fifth in the committee rankings, missing the CFP for just the second time in its nine-year history.

An argument could be made Georgia got the tougher draw of the top two.

By the recruiting rankings, Ohio State has as good a roster as anyone in the country.

Georgia coach Kirby Smart talked about how familiar the Bulldogs are with Ohio State’s players, because the teams recruit from the same pool of blue-chippers.

“I know the NFL teams really enjoy watching these kids go against each other,” Smart said.

For Georgia, it is the second straight CFP appearance and third overall.

This time, though, Smart’s Bulldogs enter as the No. 1 team and clear favorite after following up last season’s national title with a perfect season.

Stetson Bennett and the ‘Dawgs will try to become the first team to repeat as CFP champions.

The Buckeyes won their last national title as the four seed in 2014.

This is the fourth time two teams from the same conference reached the playoff.

Alabama and Georgia have done it twice of the SEC and the Atlantic Coast Conference has done it once, when Clemson and ACC guest member Notre Dame made the 2020 pandemic-season playoff.

Michigan is in as the second seed for the second straight year — after losing to Georgia in the Orange Bowl semifinal last season.

Last year, Michigan was the first team reach the College Football Playoff after starting the season unranked in the AP Top 25.

TCU is now the second.

The Horned Frogs also are just the 13th different school to make the field in nine years.

That lack of variety is one of the main reasons the CFP is growing — even if sometimes two will do for settling who is No. 1.