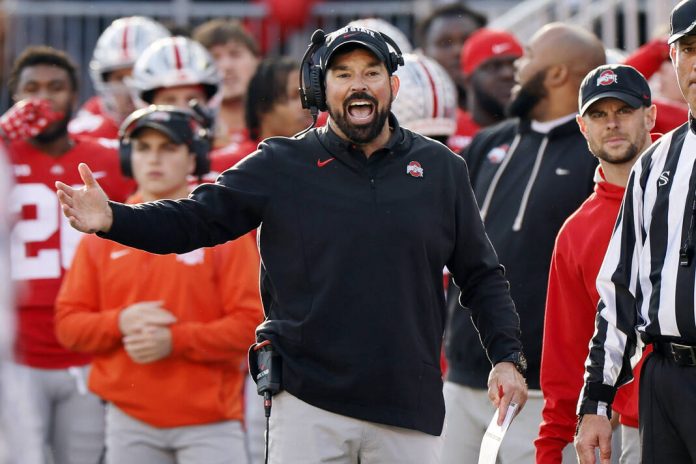 This is the way things go at the top of college football’s food chain.

If you can’t win the most important game on your schedule, there will be questions about whether you are the right man for the job.

Day is 45-5 at Ohio State as Urban Meyer’s replacement, but he is 1-2 against Michigan.

“We’ll figure out what’s next. I don’t know exactly what’s next right now, but that’s life at Ohio State,” Day told reporters. “When you lose, it all comes back to me as head coach. And that’s probably what hurts the most.”

What hurts most for Ohio State fans is The Game played out in a way that was supposed to be the second-ranked Buckeyes’ advantage, a back-and-forth affair in which the quarterbacks needed to be difference-makers.

With star running back Blake Corum, the third-ranked Wolverines were able to transform from ground-and-pound into a big-play machine, ripping off five touchdowns that covered a total of 349 yards.

Meanwhile, Day was punting on fourth-and-3 from around midfield.

“In games like that, you have to play the field position game,” Day said. “I just feel like you’re not in those situations if you’re converting on third downs.”

Under Day, Ohio State has become a quarterback and wide receiver factory.

C.J. Stroud almost certainly will become the third straight Buckeyes passer to be a first-round NFL draft pick next April.

Marvin Harrison Jr. is the best receiver in the country.

He is part of a room full of blue-chippers that produced two first-round picks in the last draft.

The talent doesn’t stop there.

According to 247 Sports composite rankings based on recruiting stars, Ohio State has the third-most talented roster in college football behind Georgia and Alabama.

So, of course, it must be the coaching, right?

And whether it truly is the coaching is not the point.

Michigan (12-0) planted its flag right in the middle of Ohio State’s block “O” at the 50-yard line after the game.

Somebody is going to be held responsible for letting that happen.

Meyer never lost to the Wolverines.

Before that, it was Jim Tressel who flipped the rivalry the Buckeyes’ way, going 9-1 against Michigan.

Ohio State fans have grown accustomed to the dominance over That Team Up North.

When Harbaugh arrived in Ann Arbor, Michigan from the NFL as a potential savior for his alma mater’s wayward football program, Wolverines fans hoped he could change their fortunes in The Game.

No matter that he rebuilt the program and pulled Michigan out of its greatest depths.

At the top of his resume: can’t beat Ohio State.

And he was pilloried for it.

Not anymore. Michigan might not be the more talented team, but it certainly looks like the tougher team, the team that better handles adversity.

“This is a spiritual team,” Harbaugh said. “They’re happy. They’re celebrating, but they see bigger things.”

This week, the Big Ten championship against Purdue awaits.

There is still a chance the Buckeyes can back into the CFP and maybe find redemption there.

The selection committee seems to be running out of good options after Clemson also lost on Saturday.

This is not what Ohio State had in mind.

Last season, after the defense melted down in big spots, Day lured coordinator Jim Knowles away from Oklahoma State to fix it.

At least not when it counted most.

So now Day, a coach with a mountain of accomplishments and a more than $9 million annual salary, is the one being judged for his failures — and getting compared to former Buckeyes coach John Cooper.

Cooper is a Hall of Famer, but for Ohio State fans, he is mostly remembered for this: 2-10-1 against Michigan.