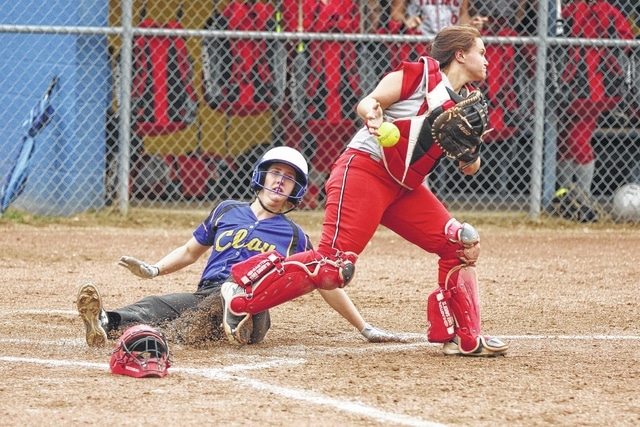 PORTSMOUTH — The gloomy and rainy weather reflected the reaction of the Clay Lady Panther fans as Symmes Valley’s Kaitlyn Payne sent a pitch over the right-center field fence, early in the top of the first inning. The two-run shot silenced the crowd supporting the home team, as the Lady Vikings took a quick 2-0 lead over the Lady Panthers.

Despite the gloomy start, freshman pitcher, Hannah Oliver showed poise on the mound and got out of the inning with only the two runs scoring. She would then pitch the remainder of the game battling every batter the Lady Vikings sent to the plate, while Clay’s offense exploded in the fourth inning to ultimately give game one of a two game series to Clay, 11-5.

The Lady Panthers clinched at least a share of the SOC I title Monday night after defeating the Lady Vikings at home.

The new SOC match-up format has worked to perfection for the softball championship in Division I, as conference teams were forced to face each other back-to-back throughout the season. Going into Monday night’s game, both Symmes Valley and Clay were undefeated in SOC I games, until the Lady Panthers won the first game of the two game series between the two teams.

“This was probably one of the better wins I’ve had as a coach here,” Clay softball coach Jason Gearheart said. “I knew coming into this how great of a team this is (Symmes Valley).”

After winning with a six-run spread, Gearheart understands the meeting between the two teams on Tuesday evening could likely be reversed, as Clay travels to Willow Wood, Ohio to finish the two-game series.

“It could likely go the other way tomorrow (Tuesday), I’m not going to get too overconfident,” Gearheart said. “Our girls played like a team today. Everybody did something.”

Oliver got the win for the Lady Panthers. After giving up her first home run of the season, in the first inning, Oliver helped keep the Lady Vikings bats in check for the remainder of the game. Symmes Valley was held to only three runs for the rest of the contest.

With the complete game outing, Oliver went seven innings for Clay, allowing five runs, three of which were earned, off six hits. She walked five batters, and two of those walks came from full-count at-bats. The Clay hurler nearly broke double-digits in strikeouts, as she fanned nine Symmes Valley batters on the night.

“Our pitcher did outstanding,” Gearheart said. “She was mixing speeds, and her change-up was on today. When it’s on, she’s hard to hit.”

Gearheart took the blame for the home run to Payne, but gave his young pitcher great credit for how she handled the situation, and complimented all three Clay pitchers for how they approach the game.

“All three of my pitchers have the same face on,” Gearheart said. “I tell them you do good, you have the same face, if you do bad, keep it even-kill. She (Oliver) showed a lot of heart and composure there. As a freshman, she grew up to more like a junior today. She looked really good.”

Payne had a good outing for the Lady Vikings, despite getting the loss, as she was the pitcher of record for Symmes Valley. She pitched all six innings Clay went to bat, giving up 11 runs. While the Lady Panthers scored 11 runs, only seven were earned, as several fielding errors helped sink the Lady Vikings. Payne allowed seven hits on the night, while walking five, and striking out four Lady Panthers.

Both teams were pretty even as far as hits were concerned, with Symmes Valley actually having one less hit on the night than Clay, who had seven, while both teams had five batters draw walks.

Jensen Warnock led the Lady Panthers in hits, going 3-3 on the night. She knocked in three runs, scored twice, and drew one walk. She also had two stolen bases against the Lady Vikings.

Tressa Carter went 2-3 at the plate for Clay. The Lady Panther senior scored once in the first inning, and drove in a run off a sacrifice in the fourth. She also hit a double in the sixth inning.

Gabby Hickman knew how to put runs on the scoreboard Monday night, as she earned three RBIs, with two in the first inning, and then another in the fourth off a double. She went 1-4 against Payne.

Webb led Symmes Valley on offense, as she went 2-4, with an RBI, a double, two stolen bases and two scores on the night.

Payne led the team with two RBIs, which came from her two-run home run in the first inning. She later drew two walks in the game finishing with a 1-2 night.

With the win, Clay guarantees at least a share of the SOC I title. Tuesday evening’s game in Willow Wood will determine whether Clay wins the conference title outright, or ends up sharing the championship with Symmes Valley, given a Symmes Valley win.

Gearheart acknowledged Tuesday night’s game will not be an easy one for Clay, as he knows Jeff “Odie” Estep will have his Lady Vikings well prepared to win, noting they will be ready to give everything they have to not finish conference play losing two straight games.

“Odie is, he’s the guy I’m trying to emulate,” Gearheart said. “Me and him get along real well. We’re good friends and I’m just trying to get where he is. He’s the guy I look up to. We will have a battle on our hands.”

http://portsmouth-dailytimes.aimmedianetwork.com/wp-content/uploads/sites/28/2016/05/web1_Jensen-Warnock-sliding-into-home-1.jpg
Earns at least a share of the SOC I title after 11-5 win