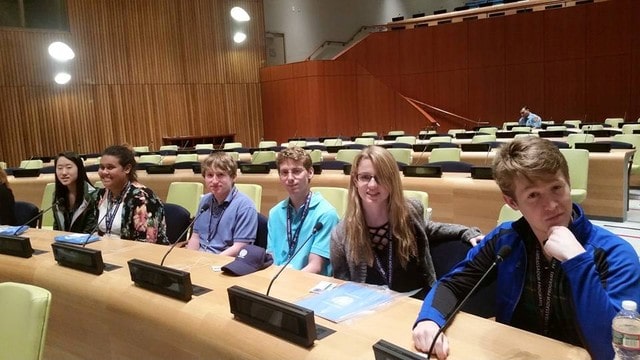 Ava McCleese, a junior at Clay High School, has recently found herself on the path to scholastic success.

This summer, McCleese was invited to participate in the People-to-People leadership summit held at Columbia University in New York — snowballing her achievements.

“During her time at the People-to-People summit, she got to do workshops and learn about leadership skills,” said McCleese’s mother, April. “They (the students) got to participate in a model United Nations program and they got write resolutions concerning global issues. She also got to meet an Iraqi ambassador. She learned about global cooperation and multi-cultural communication.”

“I learned a great deal about international relations and diplomacy, and I think that it has helped me to become a more rounded, more cultured person and to have better leadership skills,” McCleese said.

McCleese was awarded scholarships from the South Central Ohio Educational Service Center (ESC) and the Ohio Association for Gifted Children (OAGC). These scholarships, along with fundraising aided in the cost of the trip.

“Ava has been awarded summer enrichment scholarships through our program for several years and this past summer she was awarded a scholarship to participate in the People-to-People Program, where she learned more about government and politics,” said the ESC’s Gifted Services Coordinator, Sharee Price. “Nothing makes me happier than to help a student find their path and their passion in life. There’s a common misconception that gifted students don’t need help or guidance because they will find their way no matter what, but often times gifted students need the most guidance because they have so many interests that they find it difficult to narrow down their choices. We hope our program helps students in determining their path. Ava is an amazing and determined young woman and I’m certain she has a very successful future ahead.”

“I am overwhelmed with how awesome they are with financial support,” April said. “If it wasn’t for their financial support, these trips wouldn’t be possible. It wouldn’t have been an option for us to do this on our own. These scholarships are so meaningful and important. They help kids experience things they wouldn’t have with a typical summer experience. They’re really helping them decide what they want to do in the future, and I am very grateful.”

McCleese was also accepted into a two week summer program at the Oak Ridge National Laboratory Math-Science-Technology Institute. She was the first student from Clay to be accepted into the program.

“Last year, she had expressed interest in the program through her father working at Centrus Energy (formerly USEC Inc.) but she was ineligible because she had to be 16 and a junior,” her mother said. “She already had her application filled out, when this past summer came around, she was eligible and ready to go. She had to have a reference letter from her biology teacher, Jeff Hunter. With that reference letter and her academic success at Clay, she was accepted, it was really an honor.”

Due to the programs strict acceptance standards, rigorious learning requirements and the prior achievements of McCleese, the trip was funded by the state of Ohio.

During her time studying at the Institute, McCleese worked alongside the Nuclear Science researchers from the Institute.

“The projects that I worked on interested me and I realized that this is something that I really enjoy doing,” McCleese said. “Ever since I was young, I’ve always been interested in astrononmy and space sciences. It wasn’t until I attended Oak Ridge that I really found my career concentration that I wanted to focus on for the future. When I went to Oak Ridge I studied Plasmaphysics under Dr. Biewer. I also met another intern who had a degree in Astrophysics and I learned that you could have a combination and be able to work for various projects and locations all over the world.”

Her mentor, Ted Biewer, invited her to present at the 57th Annual Meeting of the American Physical Society, Division of Plasma Physics on Nov. 17, 2015, in Savannah, Georgia.

“There were world-renowed scientists from all over the world,” she said. “I was very honored. I was worried at first about how my work would compare to the other scientists, and then I realized that it wasn’t about just that, it was going to be an excellent learning experience. I definitely enjoyed going to the conference.”

McCleese said she hopes to attend Ohio State University and pursue a degree in Astronomy and Astrophysics. After completion, she wants to continue her education in Plasmaphysics at the University of Wisconsin.

“I am absolutely thrilled that Ava has accomplished so much,” April said. “I advised her at the beginning of her high school career to make a list of things that she was interested in, and things that she believed she would like to do in the future. Every summer she’s been able to eliminate one or two of those interests and get experience in what she wants to do with her future.”

“Without my support network of the ESC, the OAGC, my teachers at Clay, and my family, I could not have made it to where I am. These people have helped me make decisions about my future,” McCleese said.

In addition to her scholastic achievements McCleese is member of the National Honor Society, a member of the Cirque d’Art Theatre, participates in the concert and marching band at Clay High School and is a cross-country runner.