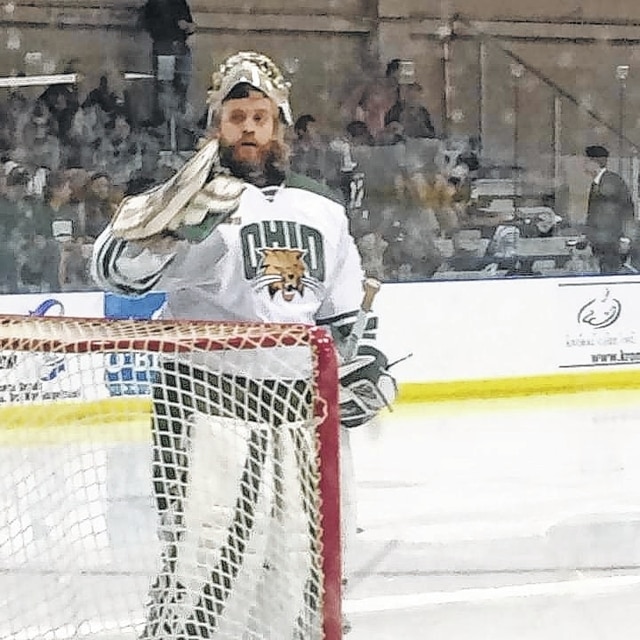 Dreams do come true — even for the nine-year-old boy sitting in Nationwide Arena cheering as the hometown Columbus Blue Jackets pull out a 3-0 victory over the Calgary Flames.

That contest occurred on Dec. 19, 2002. That was the day a young Jacob Bloomfield decided the traditional sports in southern Ohio weren’t going to fulfill his desire. He knew he was going to be a hockey player — the only question was where?

The answers came pretty quickly for Bloomfield, who started traveling to Athens to watch the Ohio Bobcats Division I hockey squad. Shortly after, the Minford native began playing hockey in Athens.

Now, after playing his first two years with the Bobcats’ Division II squad of the American Collegiate Hockey Association, Bloomfield has finally achieved his goal of making the Division I club in Athens.

However, even though he made the team, Bloomfield will have to fight for playing time. He is currently listed as the No. 3 goalie (only two goalies dress on game day).

“I’m excited to be playing in Division I but the next step I’m trying to achieve is to play as much as I can,” Bloomfield said. “On the Division I team, we have three goals who are all juniors and I’m the new guy. It’s going to be a bit of a challenge to break through.

“I played in my first game (Oct. 2) but it’s going to be a constant challenge. I’m going to have to work my butt off in practices and off the ice. “

Working to overcome the odds is nothing new to Bloomfield, who attended Minford High School while playing for a club team called the Athens Bobcats.

For four years, Bloomfield traveled to practices, which were held two nights a week, and to games. Bloomfield often times would leave right after school to attend practice before finally returning home after 11 p.m. on week nights.

“At the time it seemed totally normal because Athens was the closest place,” Bloomfield said. “I guess we did it so often that we got use to it. But now looking back, I’m like how did we do that and not go crazy, or broke. But we did it. We managed. I’m really thankful that my mom and dad were willing to do that because obviously without them, I wouldn’t have been able to get myself to practices or games.”

That nine-year-old boy might have fallen in love with the game as he watched the Blue Jackets at Nationwide Arena, but Bloomfield’s desire to succeed on the ice as never been stronger.