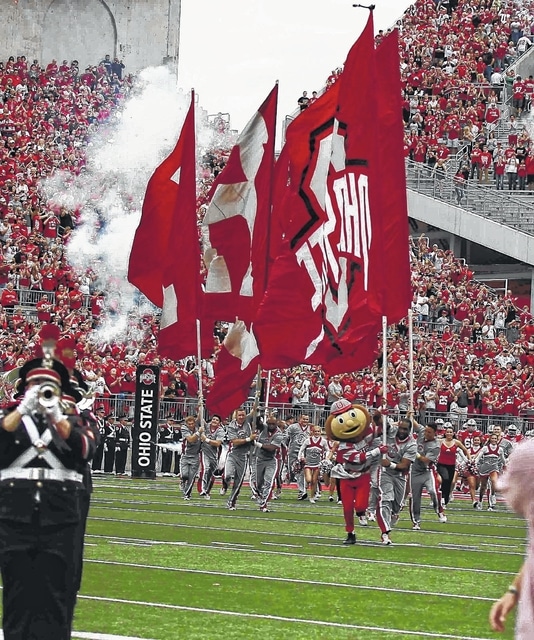 COLUMBUS — Talking about a football team’s culture has become popular with college coaches and maybe no one does it more than Urban Meyer.

It’s very important to him. So important that buying into the culture is one of the biggest ways he judges if a team is great or just very good.

Two of Meyer’s first three teams at Ohio State met his standard for being a great team and he says this year’s team has the potential to reach that level.

The one team he says didn’t reach it in his time at OSU was the 2013 team. That team, of course, has two of the three losses in the Meyer era at OSU on its record. Apparently, it also was the only one that lacked the closeness among the players that Meyer wants to develop.

“This one has the characteristics of being a great team,” Meyer said about this year’s team, which at times has struggled to find its footing while going 5-0, heading into Saturday’s homecoming game against Maryland.

Linebacker Joshua Perry arrived at the same time as Meyer in January 2012 after graduating early from Olentangy High School.

At the Big Ten’s media days in July, he said he has seen a change in the culture of OSU’s football program since Meyer took over and that it was not just talk.

“The biggest thing from when I got to Ohio State in 2012 to where we were at the end of last year is that people really bought into the culture. Guys started playing for each other instead of themselves. We had our best players being leaders,” he said.

“We just weren’t as close in 2013. It’s harder to go into battle with guys you don’t feel close to.”

Senior linebacker Cam Williams, a 4-star recruit, who has spent his career as a back-up and a special teams player, says that closeness with teammates and unselfishness are part of the foundation of OSU’s football culture.

“You try to take out the noise. We’re not worried about how many tackles, how many carries, how many touchdowns. We’re just trying to win every game,” he said. “We talk about the foundation of our team. We talk about lacking cracks and lacking selfish behavior and intentions.”

Asked why he hadn’t considered transferring, Williams said, “The linebackers, those are my dudes, those are my best friends. It’s a brotherhood that is indescribable. And obviously it’s a love for this university and what it has done for me.”