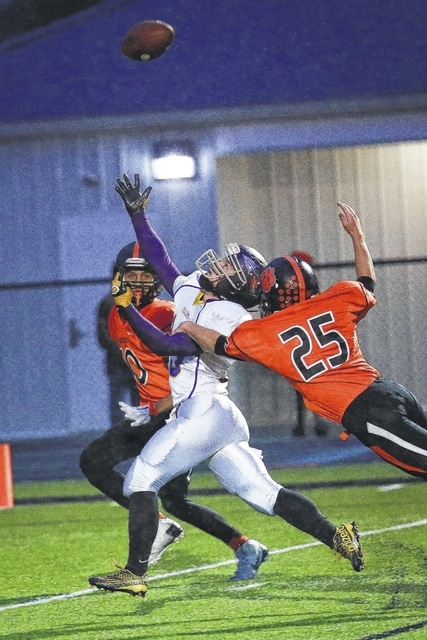 Tragedy is a part of sports. Teams compete on a nightly basis, with one emerging as the victor and the other falling in defeat. Players are often judged with their performance between the white lines. A three-touchdown game can propel an athlete into a state of heroism. A dropped fly ball in the ninth inning can ruin an athletes social standing.

However, despite the personal stress of competing in sports, athletes are also human and they are struck with personal tragedies from time to time that have the power to cripple anybody.

Valley senior wide receiver Derek Burk recently dealt with one of those tragedies after losing his grandmother, Mary Burk, on Tuesday, Sept. 29.

Burk missed a couple of days of practice to attend the funeral services of his grandmother in Harrison, Ohio. During the visitation on Thursday, as the Indians were back in Lucasville preparing to face the Waverly Tigers, Burk had a short but meaningful conversation with his grandfather, Jim Burk.

“He told me he was going to come up the next day for the game,” Burk said. “I just told him I’d make sure I scored a touchdown for her.”

Burk’s grandfather kept his promise and drove to Waverly to watch his grandson play, which was the first game Jim was able to attend due to Mary Burk’s year-long illness.

Burk said the moment was surreal after he fulfilled his promise and he began thinking about his grandparents.

“It made me happy and excited because I knew that it meant a lot too him,” Burk said. “It was the first time he got to see me play this year. I just took a moment and stopped after I scored because it was a very special moment.

“I was just happy I could score. I knew it would be more special than any other touchdowns I’ve scored or will score.”

After the game Burk met up with his grandfather.

“He smiled and told me that I did it just like I promised I would,” Burk said. “I gave him a hug because it was very special.

Even though Burk fulfilled the lofty promise to his grandfather, it was actually the second promise he has kept this season.

Just before Valley prevailed in a 28-22 contest against the Raceland Rams, Burk visited his grandmother in the hospital.

“I told her I would get one of her then and I had one in the Raceland game,” Burk said.

Not only did Burk score against the Rams but he hauled in the game-winning 6-yard touchdown pass the kept from suffering their first loss of the season.

“That was also very special because I told her I would get her one and I did,” Burk said. “That was a very important one.”