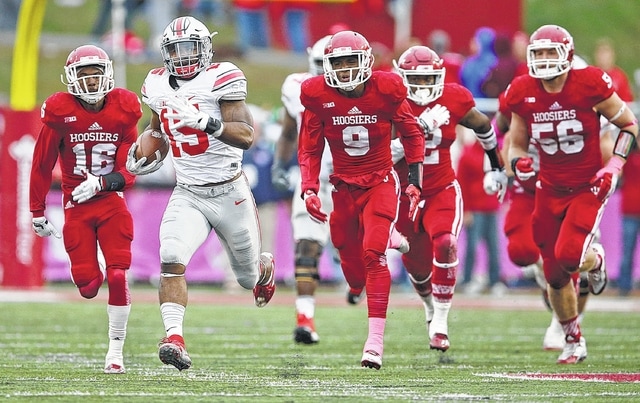 COLUMBUS – Where many people on the internet saw only doom and gloom, Urban Meyer saw hope.

Ohio State’s 34-27 win over Indiana, which wasn’t decided until Eli Apple batted down a pass by the Hoosiers’ Zander Diamont in the end zone in the final seconds, left Meyer in a better frame of mind than many OSU fans.

“I think we’re on the border of being very good,” Meyer said at his weekly press conference on Monday.

The reason for his optimism was that Ohio State’s struggling offense put check marks aside of many of the areas where he wanted to see improvement.

“The secret, the foundation of our offense is to control the line of scrimmage. Did we do that? Yes,” Meyer said. “Perimeter blocking? Yes. Our guys did an excellent job. Hit the downfield play-action pass? It was OK. It’s very close.”

The Terrapins have been outscored 73-6 in their last two games by West Virginia and Michigan. Last week, they gained only 105 yards total offense in a 28-0 loss to Michigan.

Maryland has played three quarterbacks already this season and those three have combined for 15 interceptions.

While Meyer thinks he saw signs of Ohio State heading in the right direction, what he saw was far from perfect.

Turnovers and a lack of scoring in the red zone inside the 20-yard line are two big concerns that still need to be addressed.

The bad news is that Ohio State has 13 turnovers in five games – six fumbles and seven interceptions, which is next to last in the Big Ten. The good news is that the team which has even more turnovers, 17, is Maryland.

OSU got 274 yards rushing and touchdown runs of 55 yards, 65 yards and 75 yards from Ezekiel Elliott against Indiana, which will fix a lot of mistakes.

Those three touchdowns were the kind of big plays that have been absent from Ohio State’s offense most of the season.

“I think everybody’s looking for exceptional,” Meyer said. “We’ve had some downfield hits but not nearly to the extent we’d like.”

INJURY REPORT, PART ONE: Wide receiver Corey Smith will miss the rest of the season after suffering a broken leg in the second half against Indiana, Meyer said.

Smith had four catches for 62 yards in four games this season and also played on special teams. He was suspended for the opener.

INJURY REPORT, PART TWO: Defensive back Cameron Burrows might have to have surgery for a foot problem, defensive coordinator Luke Fickell said.

INJURY REPORT, PART THREE: Wide receiver Curtis Samuel carried the ball once and did not catch a pass at Indiana after Meyer talked about making him a bigger part of the offense.

The explanation was that he suffered from back spasms most of last week and did not practice, Meyer said. Samuel is expected to be ready to play this Saturday.

WHERE’S BRAXTON?: Braxton Miller carried once for 14 yards and was dropped for a nine-yard loss on a shovel pass on the only two times he touched the ball against Indiana.

“He deserves touches. He’s an electric player with the ball in his hands. We just have not got him loose the last couple of games,” Meyer said.

RED ZONE REMEDY?: Ohio State has scored a touchdown only six of the 16 times it has been inside an opponent’s 20-yard line this season.

Meyer was asked if he had considered using J.T. Barrett at quarterback in those situations, similar to what he did with Tim Tebow when he was a freshman at Florida.

“We’ve thought about it. We’ve had that conversation. At this time we haven’t made any decisions on that right now,” he said.