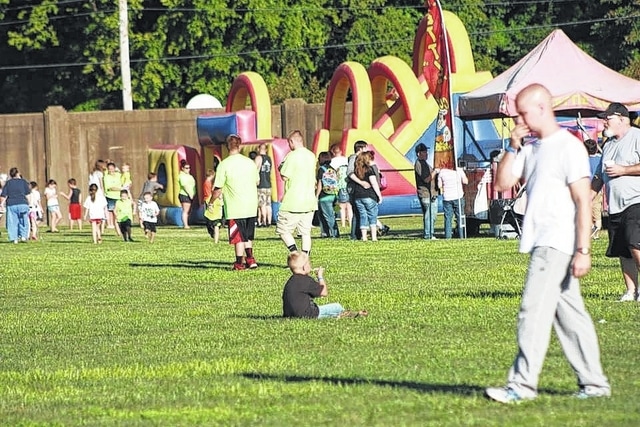 NEW BOSTON — Relaunch: A Community Event, held Saturday, Aug. 1, in the New Boston Stadium, was a tremendous success according to Scott Hilbert, one of the event organizers.

“Last Saturday the sounds of New Boston stadium could be heard for miles around as Relaunch 2015 surpassed the expectations of the community and even those involved,” Hilbert said. Relaunch 2015 was remarkable. We had 1,038 people in attendance and even I was shocked at the community turn out of this event.”

Hilbert said Relaunch was an opportunity for the community to gather for a fun filled, family focused evening. With local sponsorship from Lakeside Church, Scioto Smiles, Victorious Life Church, Rubyville Community Church and Portsmouth Ambulance the entire event was free. The evening also provided those in attendance a chance at prizes totaling $1,200.

“There was something for everyone as Relaunch provided music, inflatables, food, and over 22 local booths for people to hear about the New Boston Community,” he said. “The booths encompassed churches, businesses and other local organizations. Many of the tables closed early because they gave away everything they brought.”

He said New Boston has a lot to offer and there are many business and churches within walking distance of the stadium. Allowing these organizations to set up a table just added to their own promotion.

“We expected 1,000 people, we planned for 1,000 people and we were very fortunate that over 1,000 people came out to this event,” he said. “With a first year event you just never know what may happen or how many people may show up. We were very happy that everything went well.”

He said the New Boston community deserves a good, clean, healthy event like Relaunch and said they were blessed to be able to provide that.

“With four massive inflatable, kettle corn, a shaved ice truck and live music there was something for everyone. The kids that came out really loved the inflatables and the shaved ice,” he said. “It seemed like they had the longest line all night. And because everything was free I think they enjoyed it even more. Who doesn’t like free?”

The Glenwood High School soccer team manned a soccer goal and allowed participants a chance to try score on a varsity soccer player.

The evening was capped off by local band 47 to Sunrise who performed live. Scott Artis, guitarist from 47 to Sunrise, said participating in Relaunch 2015 was a wonderful experience.

“Being a part of Relaunch 2015 was a wonderful experience and a blessing for our band. As we performed and looked out over the crowd of 1000 people, we could truly see the positive impact the event had on the community. God is good,” Artis said.

With the success of Relaunch there are plans to continue the event next year.

“We definitely plan to have the event again next year. I hope now that people have seen what Relaunch is that we will have even more community involvement next year. The New Boston Stadium was the prime location and it provides room to grow,” Hilbert said. “The stadium is huge, there is room for twice as many local business, organizations, churches or other groups to be involved and represented.”

The event had nearly 60 volunteers from both Victorious Life Church and Lakeside Church, each are located in New Boston. Anyone interested in being involved with Relaunch 2016 may contact Scott Hilbert at 614-561-4418 or check out Facebook.