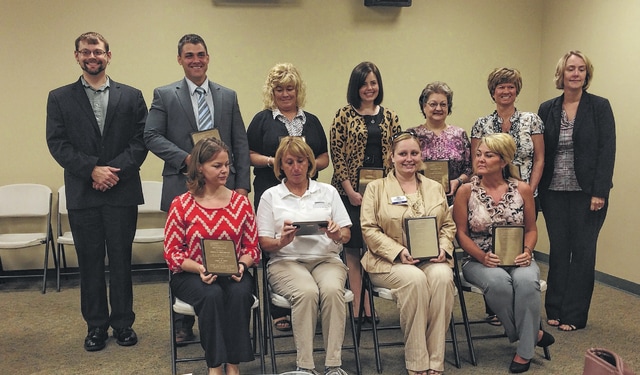 On Tuesday, the Portsmouth Area Chamber of Commerce held its annual awards breakfast at the Scioto County Welcome Center. The awards given out include chamber members of the year and distinguished citizen of the year.

“The Chamber Distinguished Citizen Award is given to an individual for outstanding dedication is serving the needs of our community,” said Luanne Valentine, president of the Portsmouth Area Chamber of Commerce. “This year’s distinguished citizen has one of the most challenging jobs in Scioto County.”

Valentine said Kester has been a volunteer firefighter in Minford since 1997. In 2008 he joined the Ohio National Guard and deployed in the fall of 2011 until the fall of 2012.

“He is always eager to speak about his deployment and has done so with area youth. Additionally he helps with the Minford High School Boys Basketball Team and this past spring he was the chair of the Simon Kenton Council Eagle Scout Dinner,” Valentine said. “He is a true champion for Scioto County and the surrounding area. His commitment to development new business and support growth of existing businesses is unprecedented.”

She said Kester’s leadership on a regional level has lead to funding for several Scioto County businesses.

Kester expressed appreciation and gratitude for the recognition.

“We are trying to do some good things in Scioto County,” Kester said. “We’re trying to be more proactive (as a community), in the past we’ve set back and waited for folks to come to us. Now we’re going out to them and trying to get businesses to take a look at us.”

As a part of the award, Kester will throw out the first pitch at Portsmouth Day at Great American Ball Park with the Cincinnati Reds.

Portsmouth Area Chamber of Commerce Member of the Year was awarded to Dave Beam. Beam conducts monthly ‘Hour of Power’ events with the chamber and its membership. According to released information, In this House of Power you will be introduced to business leadership, mastery, marketing, sales, systems and team building.

Hour of Power events are held the first Tuesday of each month.

The chamber also named Southern Ohio Medical Center (SOMC) member of the year. SOMC offers a monthly Healthy Exchange, monthly in corporation with the chamber. Health exchanges are held the third Wednesday of each month at the Scioto County Welcome Center.

Also recognized during the breakfast was the Leadership Portsmouth Class of 2014. According to a program description, “Leadership Portsmouth is a community educational program established in 1990 to help build and enhance the community of Portsmouth by developing the talents, tapping the energies, and harnessing the resources of our region’s present and future leaders.”

For more information about the Portsmouth Area Chamber of Commerce and the programs offered visit www.portsmouth.org.