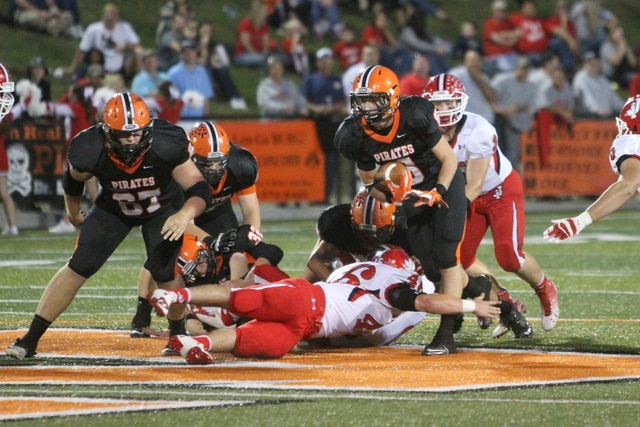 It may be the Dog Days of summer, but we’re just a month away from the kickoff of the high school football season. To get back in the spirit, the Daily Times sports staff scoured the 2015 schedule and found the five high school football matchups they’re most looking forward to in the upcoming season.

The Northwest Mohawks shared the SOC I crown with the Oak Hill Oaks and Symmes Valley Vikings last season. However, the Mohawks had an opportunity to claim the conference crown in the final game of the season. Unfortunately for Northwest, the Mohawks lost to the Oaks 34-14, which setup the three-way tie. In 2015, Oak Hill will visit McDermott during week seven, which could setup a similar scenario. Can Northwest knock off the Oaks, who have won or shared the last six SOC I titles?

Wheelersburg was an offensive juggernaut a year ago, often eclipsing the 40-point barrier. However, the Pirates were unable to break the goose egg on the scoreboard in a home loss to the Jackson Ironmen. Jackson handed Wheelersburg its most lopsided loss of the season in the 27-0 shutout. The Pirates are going to be looking to settle the score in the week five road matchup.

Under first-year coach Ben Johnson, the West Senators pulled off a home upset over Valley, ending the Indians’ 36-game regular-season win streak. After scoring 20 points in the opening quarter, the Senators cruised to a 34-20 victory. Will West be able to sustain it’s momentum against Valley or are the Indians prepared to start a new streak against the Senators?

You’d be hard pressed to find a bigger rivalry in Scioto County than Wheelersburg and Valley. While last season’s game lacked drama at the end as Wheelersburg rolled to a 33-7 victory, it’s hard to imagine this year’s rivalry game won’t be intense and exciting to watch. Also, with the game taking place in week seven, it has a chance to be a conference-championship contest.

Perhaps no game lived up to its prime-time billing quite the way the Portsmouth/Valley game did a year ago. The opening game of the 2014 season featured a little bit of everything, including a combined 81 points and 904 yards of offense. The Indians, who were sporting a 30-game regular-season win streak at the time, trailed 40-34 midway through the fourth quarter before senior running back Alex Loop found the endzone, giving Valley the one-point win. While the 2014 game became an instant classic, hopefully the 2015 matchup will become memorable in its own way.

Like Chris, I’ve circled the West/Valley and Wheelersburg/Valley matchups on my schedule, but that’s where the similarities end.

This may not be the best matchup on paper, but it marks the beginning of a new era for Trojan football. After years of being over-matched by much larger schools in the SEOAL, Portsmouth has finally found a natural fit with the much smaller — and closer — OVC schools. For the first time in a long time, the Trojans will open their conference schedule with a realistic shot at a title.

Northwest is still riding high after sharing a conference championship for the first time in school history in 2014. Now, the Mohawks want the SOC I to themselves.

East is the first real test on Northwest’s conference schedule, a team the Mohawks defeated in a wild 28-12 contest in Sciotoville last year. But this season, the Mohawks won’t have quarterback Drew Scarberry to lean on.

The Mohawks will also need to find a way to stop two-time 1,000-yard rusher Akia Brown and a huge offensive line lead by sophomore Blaine Scott — an Ohio and Toledo recruit. Coaches Brooks Fry and James Gifford both know that this game could give their squads a leg up in the conference championship race.

This game proved to be a de-facto SOC II championship game in 2014, as the Pirates spooked the Senators for a 37-21 win on Halloween to clinch a conference championship and the top seed in the postseason playoffs. With another Week 10 matchup slated for 2015, we could be in for another do-or-die game this season.

In order to be in contention down the stretch, both teams will need to find a way to replace key starters who graduated in the offseason — including both starting quarterbacks. Wheelersburg has proved year after year that they can reload with young starters…can West do the same?