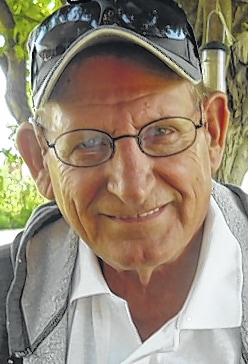 The extended forecast shows air temperatures rising to near 90 on each of these remaining six days of July and on the coming week or so of August.

So how do we catch fish on these hot days of summer?

Lee McClellan, one of the editors at Kentucky Afield magazine, in seeking an answer interviewed Dave Dreves, assistant director of fisheries for the Kentucky Department o

f Fish and Wildlife Resources. For years, Dreves said, fishermen have been told they should fish deep, cool water during this time.

But, fish below the thermocline, Dreves says, and you might as well cast your lure out into the Sahara desert.

As summer progresses, the water below the thermocline becomes increasingly hostile to fish. Organic material from plants or animals sinks to the bottom. This decomposition ties up all the available dissolved oxygen.

Fish must have dissolved oxygen to survive, so the layer of water below the thermocline becomes a dead zone as air temperatures rise.

Dreves said anglers should work their lures just above the thermocline for the best summertime fishing.

The U.S. Army Corps of Engineers Louisville District web page has charts showing the water temperature and depths of the dissolved oxygen. Go to www.lrl.usace.army.mil. Click on the “Water Information” tab, then the “Lake Temperatures and Dissolved Oxygen Levels” tab.

“You can also go out in the middle of the lake and turn up the sensitivity on your sonar unit until you see a band in the depths,” Dreves told McClellan. “That band is the thermocline. It seems the older units pick it up better than the newer ones.”

The gist of this information is that bouncing the bait off the bottom in lakes like Greenbo, Grayson, Turkey Creek, Taylorsville, Cave Run, and Paint Creek may not bring strikes during the hot summer months. The fish might be suspended at 15 feet below the surface, and hungry.

So far this year, on Kentucky waters, there have been 13 boating fatalities and 25 drowning accidents in public waters.

Kentucky suffered only 10 boating fatalities and 13 people drowned in public waters during all of last year.

Maybe the heavy rains bringing flooding to streams, rivers and lakes are to blame for the death count being up.

The Ohio River was up and running swift when a pontoon boat carrying a happy family out for an evening adventure and to watch a fireworks show on the Cincinnati water front collided with a moored barge.

It threw adults and children into the water. I did not see a final report, but it was so sad that several people who were on board were drowned.

A pontoon boat at first glance seems to be one of the safest and easiest boats to operate. But strong currents can make them hard to maneuver. Their canopy and tall sides catch the wind. They can quickly get out of control, especially if there are quite a few people on board.

I received a notice by mail this week of an upcoming Open House the Jesse Stuart Foundation is holding in celebrating what would have been Jesse’s 109th birthday on Aug. 8.

It reminded me of the good times I enjoyed at the Stuarts’ W-Hollow home during my days as a reporter for The Daily Independent. I would stop by the court house in Greenup to pick up the latest court news, then head out Ky. 1 for W-Hollow road.

I would normally arrive about the time Richard Prince was swinging Jesse up from the hospital-type bed into the wheelchair and wheeling him through the house, where the pendulums of the floor and mantel clocks kept their rhythmic beat. They went out the kitchen door and into the back yard, where the squirrels scampered in the trees, robins chirped and catbirds called.

Jesse would light up a cheap cigar, exhale the blue smoke, and lean forward and listen with interest as I read from my notes the latest news from around the county – who was getting married, who was getting divorced, who had been arrested and for what.

Then the air would be filled with Jesse’s deep chuckles as we made up stories involving those characters, changing their names to some outlandish monikers.

“The high sheriff was called Tuesday to the home of John and Lordena Pickleswiper, where Mrs. Pickleswiper had thrown her husband into the well after stunning him with the ironing board,” Jesse might say, his voice trailing off to laughter as he awaited the next line from me.

He nearly dropped his cigar from laughter after I responded with something like: “The sheriff said Mrs. Pickleswiper told him she had been ironing her husband’s white shirt when she discovered the bright pink lipstick on the collar – the same shade of lipstick she knew was worn by Nora Broadhead, the widow woman who lived over in the next holler.”

Naomi Deane would admonish us for what she called “crass,”— or was it “gross?” — behavior, but she, too, often caught herself smiling, perhaps even giving the story a title, such as: “Ironing Out Life’s Difficulties.”

Those were the good days.

G. SAM PIATT can be reached at [email protected]