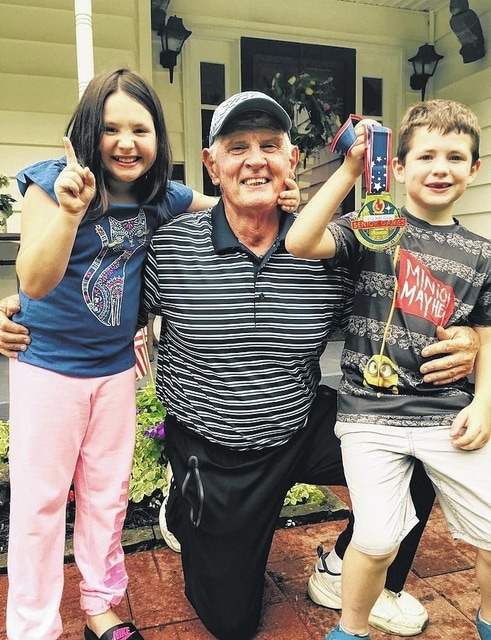 John Younce knows how to handle a set of golf clubs, and since he’s retired, he has turned a recreational hobby into two gold medals.

Every two years, the South Shore native enters the National Senior Games Golf tournament, which is held across the country. Younce picked up his first gold medal in Houston in 2011, and just returned home after capturing the gold in Minneapolis, July 8-10 in the 65-69 age division.

Younce shot a 223, winning by six strokes, although he admitted the final results weren’t a true indication of the competitiveness of the event.

After the first day, Younce trailed by seven strokes before taking a one-stroke lead at the conclusion of day two. On the final day, Younce knew he had shot a low score but wasn’t sure he won until the round was over.

Younce admitted the victory was a major accomplishment.

“It’s a great tournament,” Younce said. “It’s like a major to me, in the realm of golf that I play. I’ve enjoyed golf since I’ve retired. It’s a dream of a life time. It’s like a major and to win it twice, it’s a thrill.”

Other than beating his competition, Younce enjoys catching up with the other competitors that he’s gotten to know over the years.

“You get to meet some of the friends that you’ve met in the past,” Younce said. “When you get a little bit older, it’s nice that everybody shows up for the tournament.

Younce has already begun making preparations for 2017 in Birmingham, Alabama. Younce plays once or twice a week, but pratices around the house almost everyday. Although, sometimes Younce admits the situation might not be ideal.

“My wife Connie is very patient with me,” Younce said. “I’ve got a mowed out area that looks like a green. I’ve even got a sand trap in the back yard. I can go up to about 200 yards. I can hit shots into the green. Sometimes the wife doesn’t like that because sometimes they go sideways and hit the shed, and she gets mad at me.”

Younce evens has the opportunity to practice in front of an audience.

“I have quite an audience out there. The cows watch me hit quite a bit,” Younce said jokingly.