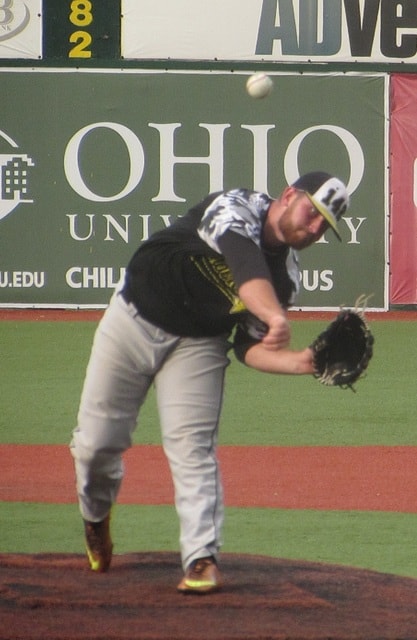 Kirk Gibson couldn’t have written it any better.

With the Waverly Legion Post baseball team trailing by a run in the bottom of the ninth inning, Minford senior Jared Alley stepped to the plate — injured elbow and all — and brought the Shockers back from the dead with one swing.

Alley’s pinch-hit homer tied the game at six, and Post 142 sealed it an inning later on a 10th-inning walk-off wild pitch in a 7-6 win over Circleville Post 134 in the second round of the American Legion Regional Tournament at VA Memorial Stadoim.

The Shockers (21-7) trailed by as many as four in the early innings of Tuesday’s game, but fought back to cut the deficit to one heading into the final inning of play. Knowing his team could tie the score with one swing, Teeters called on one of his biggest bats to pinch hit.

Alley hadn’t played since seriously injuring his elbow while pitching in the first inning of last Thursday’s game. Though he won’t be able to pitch for the foreseeable future, he’s still able to swing without pain. Not sure if he still had his power behind him, he led off the ninth inning simply looking to put the ball in play.

“I was hitting for contact in a situation like that,” Alley said. “I just wanted to get things rolling so the other guys could hit me in.”

With a 1-2 count, he more than just made contact. He lifted a towering shot to left-center field above the 345 mark on the outfield wall. It was his first career homer in pitcher-friendly VA Memorial Stadium.

“I did not,” Alley said when asked if he knew immediately that he had homered. “I was running to first and I had to look a little bit.”

After Dylan Shockley pitched a scoreless 1oth inning for Post 142, he led off the home half of the frame with one of his three walks on the evening, but not before fouling a pitch off of his shin. Despite walking with a noticeable limp, Shockley advanced to second on a Shane Spriggs sacrifice bunt and to third on a passed ball.

With Joe Henderson at the plate, Circleville pitcher Cody Blackburn threw a pitch wide of the plate that rolled all the way from the backstop. With his leg still smarting from his at-bat, Shockley sprinted home for the winning run.

“You don’t think about it,” Shockley said. “Once I touched home plate, I knew it was game.”

Early in the game, it seemed like defense would be the Shockers’ undoing. The Waverly booted four balls in the first two innings as the Panthers quickly jumped out to a 4-0 lead.

But that didn’t bother Shocker starter Brady Knittel. The West graduate rode out the sloppy defense to piece together a gutsy 125-pitch performance. He went eight-and-two thirds innings allowing just two walks and three earned runs. He stranded 13 Circleville runners on the night, including six in scoring position.

“That performance by Brady was one of the best I’ve had at the Legion level,” Teeters said.

“You have to look past it after it happens and realize it was just a fluke,” Knittel said. “You have to trust those guys to make the plays behind you.”

Eventually, those defensive plays did come, thanks to shortstop Joe Henderson. The Waverly High School product came up with a sliding stop and a flip to second to end the seventh inning, and followed that with a heads-up throw to nail a runner at home an inning later.

But the tide really began to turn in the Shockers’ favor in the sixth inning. Trailing 5-1 and showing little sign of life, singles by Matt Joyce and Garrett Carmichael sandwiched a Logan Kottenbrook walk to load the bases for Shockley, maybe the hottest hitter in Region 5.

“Shockley has been a bad man this summer. I would not have wanted to pitch to him,” Teeters said.

With nowhere to put Shockley, Circleville was forced to pitch to the Post 142 catcher. He responded by clearing the bases with a shot off the left field wall, just inches from leaving the yard. Shockley’s double cut the deficit to one at 5-4.

Unlike Alley, Shockley was swinging for the fences.

“I was going all out. Before I have two strikes, I go for everything. When you go for big things, big things happen,” he said.

With the win, Waverly will face top-seeded Yeager Post 199 in the double-elimination Regional Tournament on Wednesday at 1 p.m. at the VA. In an earlier game on Monday, Yeager throttled Chillicothe Post 62 21-0 in seven innings.

Yeager has defeated the Shockers twice this season, once in a 20-inning thriller in Cincinnati split between July 4 and July 11, and in a 16-1 bashing last Thursday.