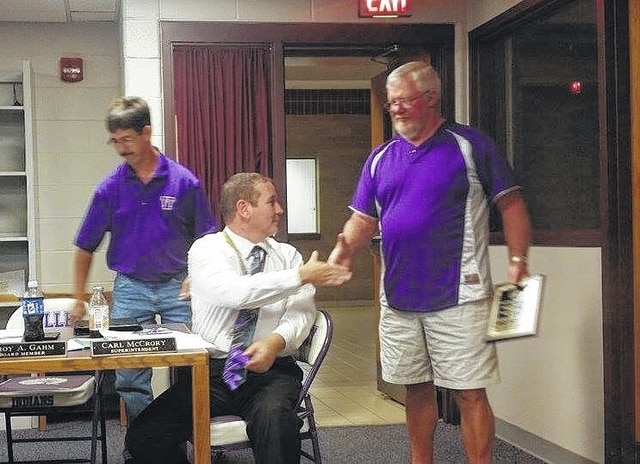 Spriggs, who recently completed his 17th and final season as the Indians’ softball coach, was presented with a plaque and received a generous ovation from the board. The plaque read “It’s not for what you’ve achieved, it’s for what you’ve overcome. That’s what defines your career.”

Spriggs explained that he chose to retire for health reasons. He has had health problems in the past, and he felt that it was in his best interest to avoid the stress of coaching.

“I made the decision that I wanted to watch the girls (and my grandson) graduate,” Spriggs said. “It’s time for me to do what I need to do and take care of myself and my kids.”

Spriggs also said he would continue to work at the school, especially in the upkeep of the softball field.

“I’m still going to work here at the school and do the things that aren’t stressful for me,” he said.

In his nearly two decades as Valley’s softball coach, Spriggs led the Indians to 241 wins, three SOC titles and three district championships. The highlight of Spriggs’ run came from 2010-2012, when the Indians won three straight district titles and advanced to the regional finals in 2011 and 2012.

This season, Spriggs led the Indians to an appearance to the district semifinals, including an upset of No. 2 seeded Piketon in the sectional championship game.