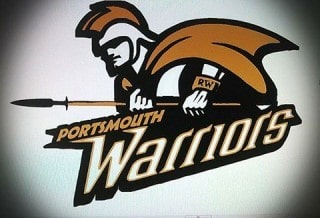 In his six years of playing and coaching for the Portsmouth Warriors, Jamie Rice can’t think of a more important regular season game than this week’s matchup with the West Virginia Lightning.

“It’s definitely in the top five, probably right behind those (Northern Frontier Football League) championship games (in 2013 and 2014),” he said.

On Saturday, the undefeated Warriors — the top-ranked semi-pro team in the nation — will face off with the third-ranked West Virginia Lightning at Spartan Stadium in a battle of the Blue Collar Football League’s best teams. The winner will have a leg up in the league standings and in the race for home field advantage in the playoffs, including the opportunity to host the league’s championship game in early fall.

Saturday will mark the second meeting between the two teams this season. On May 9, the Warriors came away with an improbable 41-35 comeback victory. Portsmouth trailed by as many as 14 late in the fourth quarter, but they were able to come up with three touchdowns in the final 10 minutes to send the game to overtime.

Warrior running back Luke Brown accounted for three of the Warriors’ five touchdowns, including a one-yard dive in overtime to clinch the victory.

Though Portsmouth was able to hang on for the win in the first game with the Lightning, it was far from pretty. The Warriors committed four turnovers in the game, including three interceptions by quarterback Justin Lunsford.

“We were our own worst enemy. We made a lot of mistakes and weren’t executing very well,” Rice said.

Rice attributed the sloppy play against the Lightning to early-season jitters, jitters that the Warriors seemed to have overcome. Lunsford’s three interceptions against the Lightning represent half of his picks on the season, and the Warriors have outscored opponents by a combined score of 227-44 in their six other games this season. However, Rice knows that his team won’t be able to skate by with another sloppy offensive performance this weekend.

“They’re well disciplined, and they just read and react,” he said. “Everyone needs to do their job, you can’t have a breakdown.”

On the other side of the ball, the Warriors will need to find a way to stop the Lightning’s vaunted rushing attack. Unlike most semi-pro teams, the Lightning have eschewed the spread offense for tight formations that feature a power running game. Rice says that it’s not uncommon for the Lightning to use two tight ends for the majority of the game.

“They don’t really spread you out, they just punch you in the mouth,” he said.

The Lightning also feature a dangerous aerial attack that relies heavily on the play-action fake. In their last meeting, the Lightning picked up 307 yards through the air. including four touchdowns.

“The quarterback is pretty accurate and fast. He’s a mobile quarterback. He throws a nice ball,” Rice said.

Playing at home, the Warriors will be able to rely on their entire roster of nearly 60 players. Despite playing short-handed on the road earlier this year, Rice felt that his team’s depth — especially on the offensive line — helped power his team to a win over the Lightning back in May.

“We were able to rotate so much that I think that helped us out quite a bit,” Rice said. “Our offensive line was chomping at the bit to get out there and run another series, and I think their defense was a little tired.”

Not only would a win over the Lightning give the Warriors an edge in the playoff race, but it would signal a changing of the guard at the top of the region’s semi-pro football scene. The Lightning have a storied history dating back to the 90s, and can count former West Virginia quarterback Major Harris among their esteemed alumni.

No matter what happens this weekend, it would be no shock to see the two teams meet again later this year in the BCFL’s Eastern Conference championship game.

“Whoever win this game…it’s going to be because you’re a better team,” Rice said. “It’s not going to be the end of the world if we take a loss, but it will gauge where we’re at.”