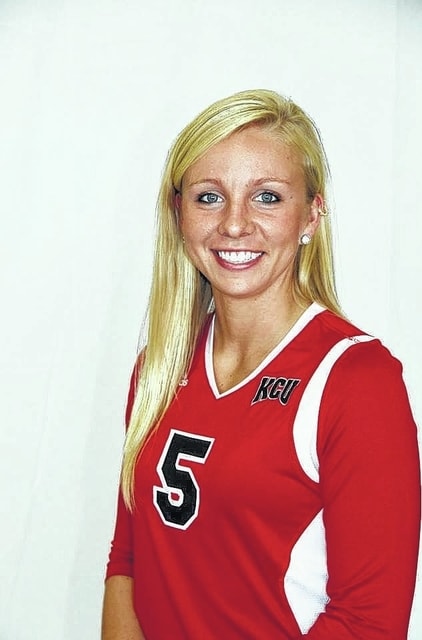 Photo submitted Lauren Dunn is the new volleyball coach for the Northwest Mohawks.

The Northwest Mohawks have a new volleyball coach and she’s no stranger to winning.

After guiding Kentucky Christian University to an NAIA National Championship during her senior campaign, Lauren Dunn has agreed to take over the Mohawks’ program.

The reigning National Player of the Year is ready to make the transition from the hardwood to the sidelines.

“I’m eager to learn a lot about myself, about myself as a coach,” Dunn said. “I have a lot of good resources to help me out. Dave (Frantz) the athletic director is there to help me with anything. My college coaches, my high school coaches; I’m excited for them to get to pour into me and help me as I start off, because I’m here to learn and I want to girls to learn, which has been my very intent from the beginning.”

While All-Star players often struggle as coaches, the three-time All American doesn’t believe she’ll have problems making the transition.

“As the setter, you’re basically the quarterback and you run the plays every game, but you also know what everyone else is doing at the same time,” Dunn said. “I think that is going to be a really big help to me because I know where the players are suppose to be. I know what the transition looks like because I’ve watched it over and over. I know when players are doing things wrong and when they are doing things right. I think that’ll be a great asset to me because I can explain each position to my players and the big picture as a whole.”

According to Dunn, Northwest lost the majority of it’s squad to graduation last year, so she’ll be working with a young team during her inaugural season.

“Obviously we are going to miss the leadership and the experience on and off the court,” Dunn said. “But I feel I’m prepared for the younger girls. I’m excited to get to know the girls and hopefully build relationships from the beginning but I’m sure the leadership and experience will be missed.

“From a coaching stand point, I would love to have that help on the court, which is going to be a downside but I am excited to invest in these girls from the beginning.”

Dunn has already held some open gyms, which has given her an opportunity to gauge the girls’ interest level as the season rapidly approaches.

Dunn is currently substituting at Northwest. She has her bachelor degree in Biology and plans on obtaining her teaching license.