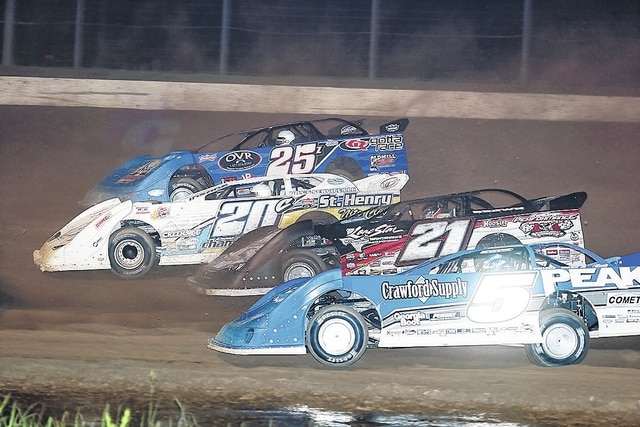 With the Lucas Oil Late Model Series in town, Brandon Sheppard took home the checkered flag and $10 thousand on Saturday in the Independence 50 at Portsmouth Raceway Park.

Sheppard survived a number of breakdowns and a wild five-car accident to take home the crown. It was his first win at PRP since winning the 2013 Dirt Track World Championship.

According to a press release from Portsmouth Raceway Park, local favorite Jackie Boggs lead the way for the first three laps before a mechanical problem forced him to retire from the race. From there, Earl Pearson, Jr. battled with Jared Landers before taking a commanding lead on lap eight.

About midway through the race, the five-car pileup eliminated Series points leader Jonathon Davenport and sent two other cars upside down. Luckily, the wreck caused no injuries. A few laps later on number 38, Scott Bloomquist lost a wheel and was forced to leave the race.

Shortly after, Sheppard made his move. On lap 45, he used a high move to pass Pearson and take the lead for good. At one point in the race, Sheppard was as far back as seventh place.

Landers, Dennis Erb, Jr., Jimmy Owens and Pearson rounded out the top five. The Lucas Oil Late Model Series will return to Portsmouth on Labor Day weekend for the River Days Rumble and in late October for the Dirt Track World Championships.

In the R.W. Rentals and Supplies A-Main, Todd Robinson beat Lucasville native Jeremy Rayburn to the line off of a lap-17 restart and led the last three laps to take the victory. Shawn Holiday, Ervin Vance, Rayburn and Jimmy Lennex rounded out the top five in the event.

Portsmouth Raceway Park will take a week off before hosting Late Models, Modifieds, Limited Lates, and Bomber races on July 18.