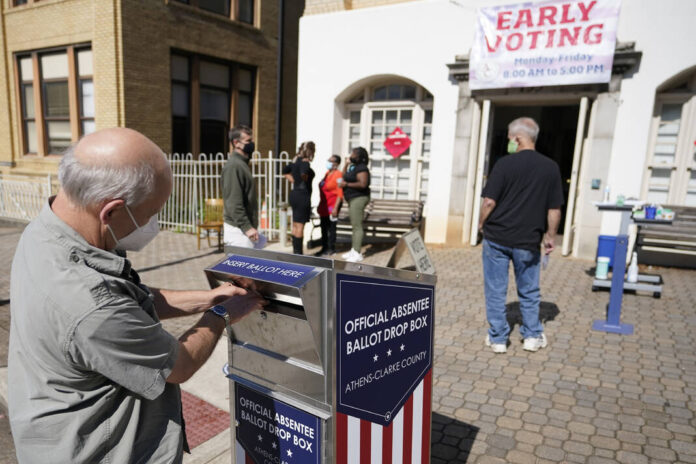 ATLANTA (AP) — The expanded use of drop boxes for mailed ballots during the 2020 election did not lead to any widespread problems, according to an Associated Press survey of state election officials across the U.S. that revealed no cases of fraud, vandalism or theft that could have affected the results.

The findings from both Republican- and Democratic-controlled states run contrary to claims made by former President Donald Trump and his allies who have intensely criticized their use and falsely claimed they were a target for fraud.

Drop boxes are considered by many election officials to be safe and secure, and have been used to varying degrees by states across the political spectrum. Yet conspiracy theories and efforts by Republicans to eliminate or restrict them since the 2020 election persist. This month, the Wisconsin Supreme Court’s conservative majority ruled that drop boxes are not allowed under state law and can no longer be widely used.

Drop boxes also are a focal point of the film “2,000 Mules,” which used a flawed analysis of cellphone location data and ballot drop box surveillance footage to cast doubt on the results of the 2020 presidential election.

In response to the legislation and conspiracy theories surrounding drop boxes, the AP sent a survey in May to the top elections office in each state seeking information about whether the boxes were tied to fraudulent votes or stolen ballots, or whether the boxes and the ballots they contained were damaged.

All but five states responded to the questions.

None of the election offices in states that allowed the use of drop boxes in 2020 reported any instances in which the boxes were connected to voter fraud or stolen ballots. Likewise, none reported incidents in which the boxes or ballots were damaged to the extent that election results would have been affected.

A previous AP investigation found far too few cases of potential voter fraud in the six battleground states where Trump disputed his loss to President Joe Biden to affect the outcome.

A number of states — including Alabama, Arkansas, Indiana, Mississippi, North Carolina, Oklahoma, Tennessee and Texas — said they do not allow the use of drop boxes. Some had not allowed them before the 2020 election, when the coronavirus pandemic prompted wider use of mailed ballots. In states where they are used, secretaries of state or election commissioners may not be aware of every incident involving a drop box if it was not reported to their office by a county or other local jurisdiction.

Drop boxes have been a mainstay in states with extensive mail voting for years and had not raised any alarms. They were used widely in 2020 as election officials sought to provide alternative ways to cast ballots with the COVID-19 outbreak creating concerns about in-person voting. The boxes also gave voters a direct method for submitting their ballots, rather than sending them through the U.S. Postal Service and worrying about delivery delays.

Starting months before the 2020 presidential election, Trump and his allies have made a series of unfounded claims suggesting that drop boxes open the door to voter fraud. Republican state lawmakers, as part of their push to add new voting restrictions, have in turn placed rules around when and where the boxes could be accessed.

Arizona Assistant Secretary of State Allie Bones said drop boxes are “safe and secure” and might even be considered more secure than Postal Service mailboxes. She said bipartisan teams in the state collect ballots from the drop boxes and take them directly to secure election facilities, following so-called chain-of-custody protocols.

“Not to say that there’s anything wrong with USPS, and I think they do a great job as well, but the hysteria around ballot drop boxes I think is just a made-up thing to create doubt and fear,” Bones said.

Arizona has had robust mail-in voting for years that includes the use of drop boxes, and in the AP survey, the state reported no damage, stolen ballots or fraud associated with them in 2020. Nevertheless, Trump-aligned lawmakers in the state pushed for legislation that would ban drop boxes, but were stymied by Democrats and several Republicans who disagreed with the strategy.

Utah is a state controlled by Republicans that also has widespread use of mailed ballots and no limits on the number of drop boxes a county can deploy. Jackson Murphy, spokesman for Lt. Gov. Deidre Henderson, a Republican who is the state’s top election official, said in the AP survey that Henderson encourages counties to make secure drop boxes accessible to voters.

Of the states responding to the survey, 15 indicated that drop boxes were in use before 2020 and 22 have no limits on how many can be used in this fall’s election. At least five states take the extra step of setting a minimum number of drop boxes required.

Republican-led Florida and North Dakota and Democratic-led New York did not respond. Montana and Virginia did, but did not answer the survey questions related to the 2020 election.

Last year, five states added new restrictions to ballot drop boxes, according to research by the Voting Rights Lab. That included Georgia, where President Joe Biden won a narrow victory and where drop boxes were allowed under an emergency rule prompted by the pandemic.

Georgia Republicans say their changes have resulted in drop boxes being a permanent option for voters, requiring all counties to have at least one. But the legislation, which includes a formula of one box per 100,000 registered voters, means fewer will be available in the state’s most populous communities compared with 2020.

Iowa lawmakers last year approved legislation to limit drop boxes to one per county. Previously, state law did not say how many drop boxes counties could use. This year, Louisiana, Missouri and South Carolina have passed laws effectively prohibiting drop boxes, according to the Voting Rights Lab, which researches state election law changes.

Along with incidents recorded in news reports, the AP survey found a handful of cases in 2020 in which drop boxes were damaged.

Officials in Washington state said there were instances when drop boxes were hit by vehicles, but that no ballot tampering had been reported. Massachusetts election officials said one box was damaged by arson in October 2020 but that most of the ballots inside were still legible enough for voters to be identified, notified and sent replacements.

A drop box also was set on fire in Los Angeles County in 2020, but a local election official said the vast majority of the ballots that were damaged were able to be recovered and voters provided new ballots. Another drop box in California was temporarily closed because of a wildfire.

“The irony is they were put in place to respond to a problem with the post office and make sure people had a secure way of returning their ballots,” said Michigan Secretary of State Jocelyn Benson, a Democrat. “And so there’s no actual legitimate concern except for, again, potential external threats or people who have been radicalized through misinformation to try to tamper with drop boxes to make a point.”

North Carolina provides an example of how deep-seated the misinformation has become. The state does not allow drop boxes and did not use them during the 2020 election.

“And despite that fact, people are still claiming drop box fraud must have occurred in North Carolina,” said Patrick Gannon, public information director for the State Board of Elections. “You can’t make this up. Oh wait. Yes, you can.”

In Wisconsin, Republicans had supported the use of drop boxes before Trump seized on mailed ballots as part of his unsubstantiated claim that the 2020 election was stolen from him. The Wisconsin Supreme Court ruling that found ballot drop boxes were not allowed under state law also said no one other than the voter can return their ballot in person to a local clerk’s office or alternate site.

Some voters said they were frustrated by the ruling.

Kelly O’Keefe Boettcher of Milwaukee said she cast her ballot in a drop box in 2020 because of safety concerns during the pandemic and is upset that they’ll no longer be an option for her or for voters who are less able to get to the polls.

“Drop boxes are accessible; they are egalitarian,” she said. “To watch them go, I feel, people can say it’s not voter suppression. But it is.”

Wisconsin state Rep. Tim Ramthun, a Republican candidate for governor, reintroduced a resolution this past week for the GOP-controlled Legislature to decertify Biden’s victory there, adding the state Supreme Court ruling on drop boxes as one reason to do so. Trump also renewed his calls for decertification in Wisconsin, citing the ruling.

According to the AP survey, the Wisconsin Elections Commission said it is not aware of any cases in 2020 in which drop boxes were damaged, had submitted ballots stolen or destroyed, or were used for fraudulent ballots.

“Isn’t a mailbox a secure place to put a letter?” asked Dave Wanninger, who with his wife used a ballot drop box in a Milwaukee public library in 2020. “Why would a drop box be any different?”