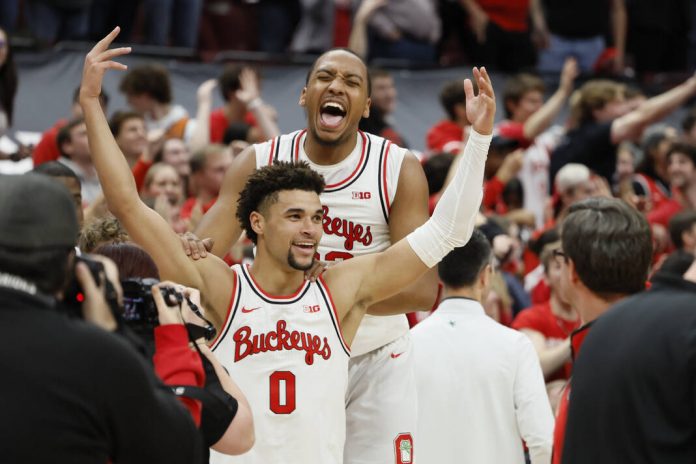 COLUMBUS (AP) — Tanner Holden — the former Wheelersburg High School star — made a 3-pointer as time expired to give No. 25 Ohio State a 67-66 victory over Rutgers on Thursday night.

Bruce Thornton made a pair of free throws to pull the Buckeyes to within one with five seconds left, and Caleb McConnell then made one of two for Rutgers.

Thornton assisted on Holden’s winner — his lone basket of the game.

“I think I might have saw it go through,” Holden said. “I think I heard the crowd more, so I think that reassurance helped me.”

“We weren’t great with all the changing defenses, but I thought we were OK,” Ohio State coach Chris Holtmann said. “All things considered with some of the youth we had out there, I thought we did a pretty good job with it.”

“I just thought with our 3-point lead right there, just get them to not be able to heave up a 3 with that little time left on the clock,” Rutgers coach Steve Pikiell said. “We got what we wanted. We got to the free throw line and we just didn’t kind of finish the deal.”

Holden sidestepped across midcourt and out of bounds before stepping back onto the court.

Thornton ran toward the top of the sideline before looking to pass.

Holden caught Thornton’s assist after re-establishing himself inbounds, and the officials counted the basket.

Pikiell said he was unsure if Ohio State was out of bounds on the final play.

“I thought we executed when we needed to, just didn’t get I guess that last stop,” Pikiell said. “I thought he kind of went out of bounds, I’m not sure, but hit a huge 3 and won the game.”

Guards Eugene Brown III and Isaac Likekele were unavailable for the Buckeyes.

Brown remains in concussion protocol, and Likekele is tending to a personal matter.

A season removed from helping Wright State claim its first NCAA Tournament win during a 37-point performance in March, Holden made an early impact in his first Big Ten game.

Since joining Ohio State as a transfer over the offseason, Holden has appeared in all nine games this season.

The Wheelersburg native had gone 2-of-5 from 3 all season, and sunk his first in six games to claim the win.

“It’s a confidence builder,” Holden said. “This is one game we’re going to learn from. We’re going to get back in the gym tomorrow.”

Key matched up against Omoruyi down low and, despite a 3-inch disadvantage, held the edge on the glass to post his fourth double-double of the season.

“My teammates found me in the right spots,” Key said. “They trust me with the ball, and I was making plays.”

Rutgers: The Scarlet Knights gave up field goals at a 46-percent clip, just a game after holding then-No. 10 Indiana to 30.4-percent in a 63-48 victory on Saturday.

Ohio State: Without assists leader Likekele, Thornton spread the ball around and had five assists. The Buckeyes managed 14 assists.