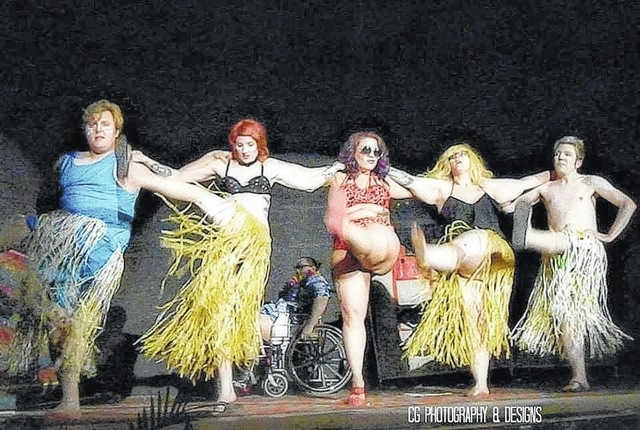 When it comes to the cult classic, The Rocky Horror Picture Show, many fans are seriously devoted. But a few are so dedicated that they decided to create a shadow cast centered around the film – what’s a ‘shadow cast?’ Nikki Blankenship, the general manager for the Tri-State Transylvanians answers our questions.

1. What are the Tri-State Transylvanians?

We actually perform under two names, we started in 2006 as Down Home Decadence. About a year ago, we re-organized under new leadership. We have a new cast director, J.J. Jackson, he’s our cast leader and for now we run under both names but we’re still one group.

That means when we perform a show, the movie is actually on screen behind us. We mimic what is seen on the screen channeling the emotions of the characters and bringing them right to the audience. We are big on audience participation so we have a lot of interaction with the people who come out to see our shows.

3. Do you only perform Rocky Horror, or are there other shows as well?

Typically and most frequently, we do Rocky Horror. That’s what we’re known for, but we have done other shows as well.

4. Why do you think the Rocky Horror Picture show has such a cult following, what’s the allure?

The Rocky Horror Picture Show is really a place for everyone. Where else can you go to see a performance and really get to interact and be part of the show? It is so much fun, the audience gets props to throw and they yell callbacks. It is a blast.

5. What goes in to making a performance like this?

It takes a lot to perform in our shows. It is different from other types of theater because we have the movie playing behind us, so the audience can tell if we are not in sync with the film. We mimic movements, gestures, and even facial expressions. Cast members also make their own costumes and strive for screen accuracy.

6. Do you have a favorite character that you like to shadow?

Most commonly, I play Janet. I enjoy playing dynamic characters. I usually like the naive young girls who undergo major changes by the end of the, really finding themselves and their place in the world.

7. Where can someone see you perform?

We perform in multiple venues right now, you can find our page on Facebook to keep up with our events and see what shows we’re going to be doing, when and where. Typically we try do a theme for the show so that’s always in the details as well. Our Facebook page is “Tri-State Transylvanians” and we update it regularly. I would say we perform at the Ro-Na theatre in Ironton frequently and we also perform at the Stonewall in Huntington on the first Thursday of every month.

8. How does someone become involved with your group?

We actually have a training cast, which is unlike a lot of a other shadow casts across the nation. However, we are always looking for new recruits and have a training cast, where recruits are assigned mentors who work with them on everything from blocking and acting skills to costuming and makeup. Everyone is welcome, you don’t have to audition but you do a lot of learning in the training. Once we feel you’re ready, you can be promoted to full cast. If someone is interested, they can contact me on Facebook or at 740-285-4998.

9. Do you have any shows coming up?

Our next show is tonight at the Stonewall in Huntington, the tickets are $5 at the door and it begins at 7 p.m. so grab your best fishnets and come join us. We’re also getting ready to celebrate our 10 year anniversary on August 5, it will be at the Ro-Na and the tickets for that are just $5 as well. We do have shows coming up at the RoNa in Ironton on September 17, and November 5.

10. Do you have anything else you’d like to add? PAAC bringing in Shakespeare this Friday