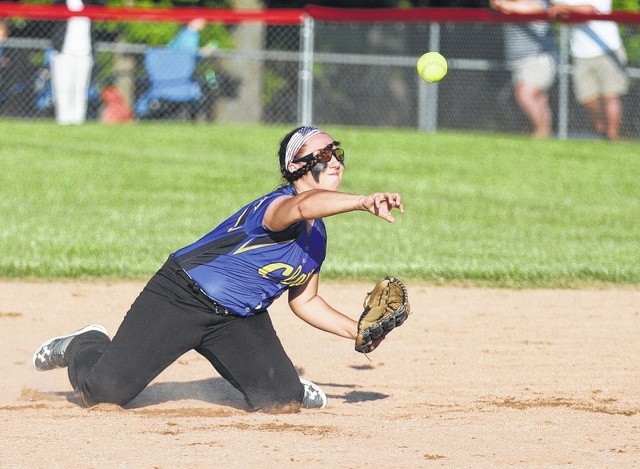 MINFORD, Ohio — The Clay Lady Panthers were defeated by the Symmes Valley Lady Vikings Monday evening in the OHSAA Division III Southeast District Championship game by a score of 8-1.

Clay went 25-5 on the year in route to their conference championship. Previously, they had defeated the Vikings in both meetings in the regular season.

“We had a great year,” Clay softball coach, Jason Gearhart said. “We just didn’t come out and hit today.”

The Panther’s didn’t record their first hit until the fifth inning, and would only manage two more the rest of the game. Five other batters reached base on the day, four with walks and one on an error. They scored their only run in the sixth.

“Jensen pitched a good game, but we didn’t give her any run support behind her,” Gearheart said. “You have to score runs to win. This year we’ve scored eleven and then twelve on them, so we can’t be surprised with the final score. But, that happens at the plate sometimes. It just wasn’t our day today.”

“We will get them next year,” promised Gearhart.

“Gabby is our first basemen,” said Gearhart. “She’s a four year starter and she’s been solid for us. I don’t know how I am going to replace her. Tressa Carter is the best player in this conference bar none, maybe even the entire south eastern district. And then Rachel is a four year starter in right field. I’m going to miss all three.

“We’ve certainly got talent coming up, but it’s hard to replace those girls.”

Besides those three seniors, Clay has a loaded freshmen class of girls that look to develop for Gearhart for the coming years. The young talent at Clay has caused several coaches in the SOC I conference to expect them to make a deep run in the playoffs in the future.

“We came out and won the SOC (I),” Gearheart said. “That’s what our goal was, we did it and that’s what matters to me this year. We didn’t get to regionals, but, I can’t ask for anymore effort out of these girls. I hope it plays out like this next year. Our pitching staff are all freshmen and sophomores and are going to continue to get better.”

“I wouldn’t trade these group of girls for anything,” Gearheart said in closing.