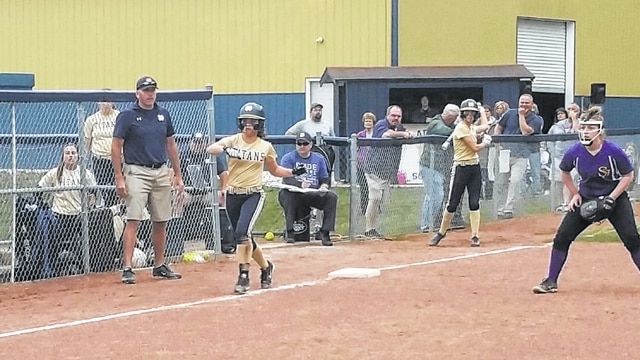 PORTSMOUTH — The Notre Dame Lady Titans advanced to the sectional finals Monday evening after they defeated the Ironton St. Joseph Lady Flyers 12-5 in the sectional semifinal round.

Notre Dame hit their way to success over St. Joe thanks in part to four three-run innings. The Lady Titans scored three runs in the first, second, fourth and sixth innings. St. Joe was nearly made a victim of the mercy rule in the sixth inning, as Notre Dame ended the sixth with a nine-run lead, with a runner in scoring position.

“We knew nothing about this team,” Notre Dame softball coach JD Whitman. “Nobody has played them and they are a small school like we are.”

While having no previous knowledge of the Lady Flyers, Whitman was impressed with how St. Joe played.

“They battled us,” Whitman said. “I thought they were good. Their pitching was a little bit of something we haven’t seen. They had a nice little pitcher.”

The Lady Titans were able to get to the left-handed pitcher from St. Joe early in the contest.

In the first two innings of the game, the Lady Titans scored three runs in each inning, while the Lady Flyers scored one in the first and then a pair of runs in the second. After two complete innings, Notre Dame held a 6-3 lead.

Notre Dame would hold St. Joe scoreless until the top of the seventh inning.

By the seventh inning, the Lady Titans held a nine-run lead over the Lady Flyers, 12-3. St. Joe managed to get two runs to cross the plate in that half of the inning, before finally making their third out.

The Lady Flyers took advantage of several errors committed by the Lady Titans in the seventh inning to bring what was a nine-run lead down to a seven-run lead.

“There in the seventh, we had a couple errors,” Whitman said. “We should have been out of that inning.”

Whitman stressed to his girls if they wanted to win a championship, they have to make every play.

“We had a couple blunders,” Whitman said. “It upsets me a little, but we came out with a win, which was the goal.”

After giving up the two runs, Whitman asked for a timeout and held a conference with his players on the mound.

“I’m an, ‘It’s not over until it’s over’ guy,” Whitman said, referencing a Yogi Bera quote, while talking to his team on the mound. “I’m thinking we have to get three outs and get out of the game because this team, they battled us. That’s why I told them if they want this (game), you have to fight for it.”

Notre Dame finished with 12 runs in their sectional semifinal game against St. Joe, which is one of the most productive games the Lady Titans have had in a sectional game, according to Whitman.

Caitlyn Ball led all Lady Titans in hits Monday evening, going 4-for-4 at the plate. Ball drove in four runs, scored three times and hit two doubles. Her doubles came in the second and sixth innings. Her single in the first inning brought in two runs, which gave Notre Dame its first lead of the game.

Hagen Schaefer showed her speed on the base paths against St. Joe. She went 2-for-4 on Monday, which was highlighted by an inside-the-park home run and a triple. The speedster also nearly reached base safely in the second off a ground ball hit directly to the first baseman. Schaefer drove in a pair of runs and scored twice.

Molly Hoover was the lead-off hitter for Notre Dame. She reached base safely three times on Monday, from her first three at-bats. She singled in the first, then doubled in the second. In the third inning she reached safely after an error by the St. Joe center fielder. Overall, Hoover was 2-for-4 with an RBI, one score, a double and a stolen base.

Lady Titans pitcher Maggie Whitman helped her own cause Monday going 2-for-4 at the plate. She scored three times in the contest, crossing the plate in the first, second and then the fourth innings. She also had a double in the fourth.

“She had I think two walks and that was partly me, because I wasn’t giving in,” Whitman said. “We were throwing curves and screwballs. I was trying not to throw too many fastballs, just being stubborn.”

Whitman was proud of his sophomore’s performance, noting she didn’t allow many hits and refused to let batters off easily.

Notre Dame catcher Jada Corns showed leadership, attention and athleticism in the seventh inning, as she fielded a short ground ball that fell a few feet in front of the right side of the plate. Corns jumped up, fielded the ball and made an off balance throw to Caitlyn Ball, the Notre Dame first baseman.

“She’s a senior (Corns),” Whitman said. “It’s do-or-die for her. Every game from now on, if you lose that’s the end for her. She came out of there and grabbed the ball, then made an off-balance throw. It was beautiful.

“Jada’s played for me since she was probably 11 years old. I was very proud of her.”

The Lady Titans will attempt to capture a sectional championship Thursday evening as they travel to Peebles, Ohio, to take on the Indians. Peebles is the fourth seed while Notre Dame is the fifth seed. Game time is set for 5:00 p.m.