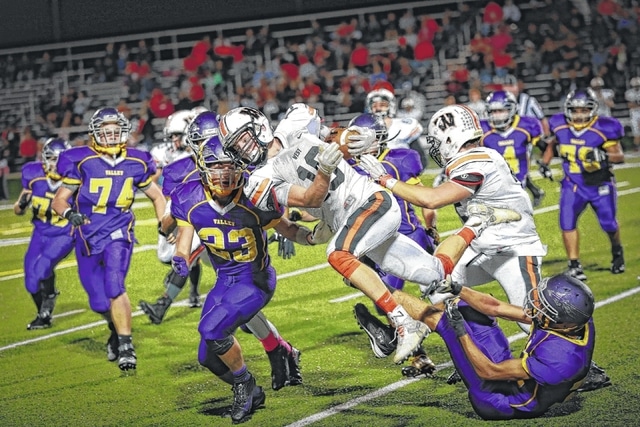 Lucasville- Valley came into Friday night’s game against the West Senators with one thing on their mind: revenge. A season ago, Valley went into West Portsmouth undefeated and came out with a shocking 34-20 loss to blemish their record. This year the Indians took no chances and came out with high energy out of the gate, winning with a 30-8 final score.

The first possession of the game belonged to Valley and they wasted no time with Brian Rolfe completing a 41-yard pass to Blake Howard followed by a 10-yard power run by Nick Basham to cross the goal line. Following the kick to the Senators after the PAT, Valley would show their dominance on defense as well. Brady Douthat went down for a sack on West’s first play of offense, and again four other times throughout the ballgame.

The second possession went even better for Valley, as they completed an 84-yard drive. Rolfe threw a massive 58-yard pass to Whitt that was stopped on West’s 2-yard line. Howard, who was kept in check by the Senators most of the night, finished off the drive with a 2-yard scamper.

Later in the second quarter, Valley capitalized off of a bad punt. After a tough three play stand by the Senators on their own goal line, Rolfe snuck the ball into the end zone to go up 20-0 after the missed PAT.

The running games on each side of the ball failed to put up consistent production as the top two runners for each team (Howard and Swords) both averaged 2 yards or less. But, as Coach Johnson of West said earlier this week, they had to be wary of the big play. In the end, the big play ended up working for Valley as the Senators had a tough time stopping Rolfe. In the third, Rolfe connected with Burk for a 37-yard touchdown pass to go up 27-0. Rolfe finished the night going 13-23 with 267 yards passing, 45 yards rushing and a racked up a touchdown with both his arm and his legs.

In the fourth quarter, Valley slowly and methodically took the ball down the field eating up the clock and managing a 21-yard field goal that cemented the win and took the game into running clock territory. With less than two minutes remaining, Coach Johnson and the Senators willed themselves down the field for a score with 12 seconds left. Douthat threw to Kegley for the reception, and they converted a similar play for two right afterward for the final score of 30-8. Besides the last desperation score by West, Valley’s defense was completely stifling. They limited Swords rushing to 35-yards and for most of the game Douthat looked uncomfortable in the pocket as he was found scrambling much of the night.

Coach Crabtree was certainly glad for the win, but visibly upset about the lack of success running the ball. “There’s some things we did in the passing game that worked really well for us,” Crabtree said. “Defensively they made it difficult for us. I’m not real happy with our offensive line. Coverage wise there was some things we were able to take advantage of, but for the past three weeks I haven’t been real happy about the play up front.”

Valley’s next game is at home against the Wheelersburg Pirates. Not only is this a rivalry game, the winner will likely go on to win the SOC. Coach Crabtree knows just how significant a win would be, but it without question is the strongest test of the season for Valley. “We gotta go back to work. They are going to stick eight guys in the box against us, and we have to take advantage of that with the passing game,” Crabtree said. “We got to find out a way to get some room off the football and take advantage of some things against them.”

Valley plays at home against Wheelersburg October 23rd at 7 P.M.

Reach Derrick Parker at [email protected] or on twitter @DC__Parker.